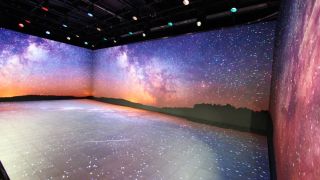 NEP and Skyway collaborated on the Smart Stage to bring virtual production to broadcasters and other productions beyond just “The Mandalorian.” (Image credit: NEP)

NASHVILLE, Tenn.—The COVID-19 pandemic was a big blow to television production; Los Angeles, the center of the production world, suffered its lowest filming levels on record between April and June. Between keeping socially distant on set and needing to travel to different locations, when—or if—production can return to what it was before is currently unknown.

Some relief to these new production headaches has popped up in the music capital of the U.S. of all places, Nashville. There, NEP Live and Skyway Studios have partnered for the construction and housing of an LED “Smart Stage.”

ALL THE WORLD’S A STAGE

William Shakespeare believed that the entire world was a stage, but the collaboration between NEP Live and Skyway Studios has turned that idea around to make this new stage a way to bring nearly any place in the world into a single location.

Officially opened to clients on June 8, the Smart Stage is housed in Skyway Studio’s Nashville location, a 150,000-square-foot facility that in addition to its sound stages includes amenities like hair and makeup, green rooms and around the clock security. But the centerpiece is the new virtual, high-resolution LED stage.

Playing back an image to effectively create the virtual 3D environment is done with a combination of 8K Unreal servers, a Disguise GX2C media server and VX4 media server and Stype Red Spy camera tracking system. Additional components include an NEP Plater Performer server for plate playback and frame accurate capture and logging, while screen mapping and control is done through Barco E2 running native resolution. The studio also features 10 GB of connectivity and multiple fiber optic links to common broadcast partners, including other NEP studios around the world.

“We’ve heard from many of our clients that a stage of this size and this design doesn’t exist anywhere else in the U.S.,” said Jason Newman, business executive, Creative Technologies, at NEP. “Even in L.A., outside the volume for ‘The Mandalorian’ or something along those lines built for a tentpole project, there’s not another stage that has the full surround with the capability that we’ve got here.”

Even when compared to the virtual production set that “The Mandalorian” has made famous, Newman said that the only real difference is the layout and the size; the hardware driving the technology and the LED displays are essentially the same, just adapted into a somewhat smaller package.

In addition to the technical and physical collaboration between NEP and Skyway, a third-party has helped bring the actual environments to the stage. Lightborne Communications was tasked with creating the video content and 3D graphics.

“Working alongside NEP and Skyway Studios has been an incredible opportunity to pair cutting-edge technology and a top-of-the-line studio facility with Lightborne’s renowned content creation abilities,” said Scott Durban, president of Lightborne. “Using Unreal Engine to create content for this space draws on all of our capabilities and combines them into a new kind of alchemy that has seemingly endless conceptual, narrative and visual potential.”

Since the Smart Stage launched in June, it has been used for a number of different kinds of productions. With it being located in Nashville, one type has been for music performances serving as a potential replacement for delayed or cancelled tours that impact not only artists and their fans, but the production crews that help produce the shows. The stage can also be used to produce content or entire presentations for corporations, as well as high-end TV or film production.

“The opportunities are endless,” said Bill Lafontaine, chief marketing officer at Skyway Studios, who emphasized their excitement over what the partnership with NEP has brought to the table.

However, you don’t need to be putting on a concert to utilize this virtual stage technology at Skyway. The studio and NEP also crafted a smaller stage that Skyway expects to be an option for local sports broadcasters (Nashville is home to the NHL’s Predators, the MLS’ Nashville FC and the NFL’s Tennessee Titans). Regional broadcasters covering these teams could do studio shoots for pre-game, halftime and post-game coverage, Lafontaine believes.

While still in its early days, Skyway is excited about the prospects of what the Smart Stage has to offer. According to the studio’s owner and CEO, Julie Stadler, they might install more Smart Stages if the current installation proves successful.

THE EVOLUTION OF PRODUCTION

As mentioned earlier, nearly everything surrounding production is impacted by COVID-19 right now. Smart Stage contributes to the potential solution by eliminating the need for traveling to different locations or having an unsafe number of people in a single environment. This was particularly helpful as Tennessee’s COVID-19 restrictions allowed for production to return sooner than in places like New York, or Los Angeles, where NEP has a similar virtual stage setup.

Still, timing played a key factor in all of this coming together.

“One of the key things that people mostly don’t realize is that, say COVID had hit us five or six years ago, the infrastructure and the bandwidth within the world did not exist at that time to be able to support what the technology can do today,” said Andy Gerber, account and project manager for NEP Live. Even so, the pandemic did not cause a shift in the ways production operates, but rather an acceleration.

“We were heading down this road with this technology,” Gerber continued.

Part of the challenge in doing this now, he said, is that many of the technologies needed to pull everything off are working together for the first time and figuring out how to properly collaborate. “Once everything stopped, it was like now we have time to focus on things that were always on the back burner. We always knew we would get there, but now we are accelerated to having to figure it out. It’s been challenging but it’s been very fun and I would also say it’s been gratifying to get to where we are.”