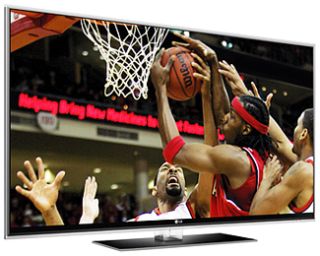 The National Basketball Association is teaming up with Sensio Technologies Inc. to provide, for the first time, live 3D coverage of NBA’s All Star weekend in more than 100 cinemas overseas. Montreal-based Sensio, a Montreal-based developer of 3D imaging technology, will distribute NBA All-Star Saturday Night and the NBA All Star Game on Sunday in Sensio Hi-Fi 3D to international fans in more than 100 cinemas in Belgium, Germany, Italy, and Mexico via its 3D Live Network.

"Working with Sensio is the perfect way for us to continue our groundbreaking 3D efforts," said Matthew Brabants, Senior Vice-President of International Media Distribution and Business Operations for the NBA. "For the first time, international basketball fans are going to have the opportunity to see NBA All-Star like never before, on the big screen in cinemas with a special courtside seat to all the action—in 3D."

"We are excited to team with the NBA to provide international basketball fans with the best images and a remarkable 3D viewing experience on the big screen," said Sensio Executive Vice-President and Chief Marketing Officer, Richard LaBerge. "Our award-winning technology, worldwide network of cinema operators, and expertise in delivering compelling live events will make NBA All-Star in 3D an unrivalled success."

The NBA has been a sports pioneer in live 3D, and featured the first-ever live sports event in 3D during NBA All-Star 2007 in Las Vegas. Since 2007, the league has conducted numerous groundbreaking 3D events that have continued to advance the use of 3D technology in sports.

PACE, a Burbank, Calif. provider of 3D technology—founded by Avatar camera developer Vince Pace—has worked with the league on all of their 3D initiatives and will produce the NBA All-Star 3D events. Coverage will include the use of eight 3D cameras throughout Staples Center, including three special 3D Shadow cameras. The 3D Shadow cameras will be placed directly on top of the main broadcasts cameras, providing an efficient and non-intrusive way to capture all the action in 3D. Exclusive commentary, tailored for 3D, will be provided for international fans watching the 3D events.

NBA All-Star Saturday Night takes place Saturday, Feb 19 and the 60th NBA All-Star Game will be on Sunday, Feb. 20, both at the Staples Center in Los Angeles.