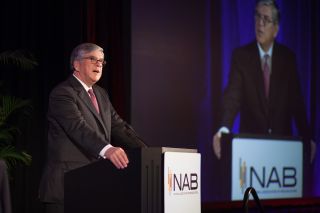 According to his statement, an MRI revealed that Smith had a blood clot, “but thanks to the quick medical intervention I received, an actual stroke was averted. As a result, my prognosis is extremely positive and there is no permanent damage.”

Smith continued: “I am so grateful to Sharon for immediately jumping into action and getting me the medical attention I needed in order to have this outcome, for Sue Keenom and Karen Wright for all of their help getting information to my medical team, and to the doctors and nurses who took such great care of me.”

Numerous industry and government colleagues gave their well wishes to Smith over social media after hearing the news.

“I am indeed a man blessed for all the prayers that were said on my behalf and for the love that I have felt,” Smith said. “Even though I am not often on social media I have been forwarded the many Tweets and postings that have sent well wishes my way and to say I am humbled is an understatement. I look forward to seeing you all soon—if only on Zoom.”