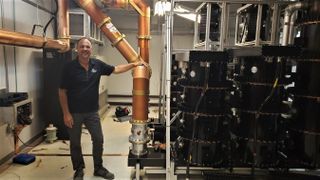 When the NAB announced Jim Stenberg of American Tower as the recipient of the 2020 NAB Television Engineering Achievement Award, it was a reminder of the important role RF engineering plays in the day-to-day operations of over-the-air TV stations.

For nearly 35 years, Jim has risen through the ranks of a variety of antenna and RF companies that reads like a who’s who in the television business. Along the way he has been mentored by some of the visionaries that have helped advance RF and microwave technology.

Like so many in our industry, Jim’s love of broadcasting started in his teens when he moved to a new community in New Hampshire and discovered the wonders of ham radio.

“I enrolled at a new junior high school and, not knowing anyone, I got involved in the ham radio club where all the geeks were,” Jim said. It wasn’t long before his interest expanded to antennas, culminating in the building of a 40-foot radio tower out of 2x4s with the help of his father (in the front of their house, no less).

Despite this, Jim says his first ambition was to become a commercial pilot. Unfortunately, after his doctor informed him that his eyesight was not good enough to pass a physical a week before starting at Daniel Webster college, he switched gears and decided to follow in his father’s and grandfather’s footsteps to study  engineering, while still gaining his pilot's license.

After that, it was on to the University of Lowell where he received an undergrad in electrical engineering. Soon after graduation, he was tapped by Thomas Vaughan, of Micro Communications—recipient of the NAB Engineering Achievement Award in 1994—to direct their engineering on antennas and RF systems.

“He was one of my mentors,” Jim said. “He provided a lot of input and then  left me alone to figure stuff out and get it done. I don't think that happens much anymore for a 25-year-old.”

Jim moved to Portland, Maine, in the  early 90’s to work for Spencer Smith—another of his mentors and founder of Passive Power Products—to develop combiners, supplying products to Comark and Harris, among others. In the mid-90’s he worked as a consultant, co-wrote a handbook on digital television implementation and then joined Jampro on the west coast to develop the company’s RF products.

He eventually ended back in Maine to design, build and sell RF systems for Dielectric, working with several broadcast engineering stars there, helping them earn a Tech Emmy for filters. He helped design and build RF systems for hundreds of DTV transmitters and combined systems, including those for Sutro Tower, World Trade Center, Empire State Building, DTV Utah, Boston, Atlanta along with a patented “Shared Line Tee” system that allowed use of one line for two antenna feeds. It was also during this time that Jim worked on ATSC committees, developing and testing filters and antenna systems for the DTV transition, working with Jules Cohen, another mentor of his.

“Jules was an amazing force within broadcasting and a fount of knowledge,” Jim said.

In 2005, Jim struck out on his own to form a consulting/field service company and travel like crazy throughout the United States.

At American Tower Corporation since 2013, Jim serves as the principal RF broadcast engineer and subject matter expert on broadcast transmission systems on the company’s towers throughout the U.S.

Currently Jim has been busy commissioning broadcasters on company-owned repack antenna systems, scheduled to wrap up this summer. It’s been among the most challenging projects in his career, “just for the sheer volume of work.”

“We built 15 new large multichannel systems in basically a year and a half,” he said.

After more than three decades in the business, what is it about broadcasting that drives him?

“I like working in the broadcast industry because it's something that you can quickly know you're making a difference,” he said. “I think that television over-the-air provides an important service to the public and we’re being shown that especially now.”

Jim will receive his award online during NAB Show Express, May 13-14.