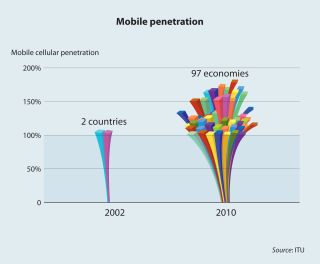 GENEVA, SWITZERLAND: When it comes to betting the farm on mobile media, the math don’t lie. More people in developing countries around the world have cell phone subscriptions than toilets, according to the International Telecommunication Union. The ITU said cell subscriptions totaled 4 billion in developing countries at the end of 2010, while 2.6 billion people lacked “access to toilets or other forms of improved sanitation.”

In 2010, 833 million people were living in the 49 U.N.-designated Least Developed Countries. In spite of these being the world’s poorest countries, and much remaining still to be done, mobile phone services across the LDCs grew steadily throughout the first decade of the new Millennium.