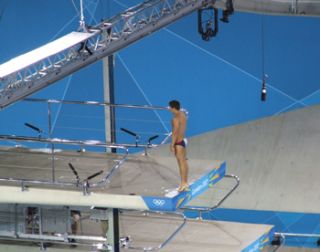 Audio Technica BP4027 Stereo shotgun microphones on the Olympics diving platform and AT4050 hang in for atmosphere capture.

LONDON—When mic-ing up for a sporting event, consider that most U.S-based sound technicians who work on major league sports normally stick to those that are most popular domestically. That means many of them are highly skilled in the nuances of sound for baseball, football, basketball, hockey, golf and auto racing.

Then consider that many of those same people, who are well-respected in sports circles, will therefore be asked to work the Olympics— which revolves around dozens of sports that aren’t part of the mainstream in the United States.

That can present an interesting set of circumstances when those technicians are being asked to cover sports that are somewhat, well, foreign to them—such as archery, badminton, track and field, and gymnastics.

But don’t think that domestic operators don’t want to broaden their skills by working a more varied palette of sporting events, according to Dennis Baxter, a freelance soundman who has served as the full-time audio designer for the host broadcaster, as well the International Olympic Committee, dating back to the Atlanta games in 1996.

“The challenges presented by covering various sports can be interesting, especially considering that mics have not changed much since they were invented,” said Baxter, “in stark contrast to the rest of the TV industry.”

That’s because of the basic approach that’s required. “The physics of sound is about the movement of air. And the diaphragm is set in motion by the movement of air to capture sound. No one has figured out how to make any enhancements, though the speakers have certainly improved.”

Baxter oversees the pool feed for the world, “meaning NBC is one of my clients. So we produce the soundtrack for the world, opening to closing, for every athlete,” he said, “and we do 60 different sports.”

BEYOND TRADITIONAL MICS
Since the aforementioned marquee sports get most of the coverage in the U.S., that’s what the production teams become the most proficient in covering.

The Audio Technica BP4071L is used with a microphone operator to follow the action. “So when the Olympics start, we have little time to ever get it right. We spend lots of time putting the plans on paper, and conferring with different people and technologies in the other sports, to try to perfect it. We have 20 production teams from around the world, all pros in their own field. And they all have their own ideas about what works.”

As for Baxter’s journey, nine Olympics ago in Atlanta he was determined to get beyond the traditional mics that had been used. Now, he has. “We use 25 types of mics during the course of the games and I started looking for micro details,” he said.

That took a great deal of work and enough numbers-crunching for a team of statisticians, given that those 25 types of mics are from the 3,500 total that Baxter uses during the Olympics (with the addition of golf to the games in Rio de Janeiro in 2016, he’s planning on using up to 4,000); 25 unique models are from Audio Technica, the manufacturer that Baxter primarily relies on.

“There are about 50 different setups in the Olympics,” he said. “One subset is the gymnastics events, where we use 25 mics, including mono shotguns, stereo shotguns, lavaliers, contact mics, dual-element and studio-grade large diaphragm mics to completely construct the sound.

“A major component of that selection is the housing and size of the mics. I’m looking to put the mics as close as possible to the athletes and the action,” Baxter said, “and we build layers from there.”

This Audio Technica boundary microphone captures the pounding running sounds as Olympic gymnasts approach the horse. For instance, if he’s covering the vault of gymnastics, he starts at the chalking box with a wireless mic so the viewers can hear the hand slap. Along the runup ramp are boundary mics on both sides, so they hear the pounding running sounds as the athletes approach the horse. Under that runway (actually a oneinch piece of birch plywood) are contact (or velocity) mics that detect the vibrations in a resonant surface.

Then there are lapel mics on the vault; one faces the athlete and one is set toward the landing zone, where there are additional boundary and lapel mics.

And that’s just one of the six events that compose the gymnastics competition. “Then we cover every single sport to the same level, including vaults, hurdles, tennis nets, etc.

EXPANDING ROSTER
To think: “In 1992, the Olympic mic roster was basically lapel, long shotgun and short shotgun,” he said.

Baxter gave a special nod to Audio Technica. “I’ve dealt with all of the major manufacturers. Since 1996, I’ve made significant changes in my approach because a manufacturer may have designed a mic for a certain purpose, but I may want to use it in a different way” he said.

“For example, when I came across the small, flat boundary mic, I found a tool with a low visual profile and was safe to place close to the athletes,” he said, with another example being his use of AT 4045s spaced in arrays for all of his atmosphere mics.

All told, the company was very helpful, he said. “In sports, there should be a lot of consideration to use lots of mics,” he said, “and for the Olympics, since they are so diverse, we had to rethink the sound stuff. Audio Technica was a supportive and willing partner and has made every attempt to satisfy my needs.”

Referring to a documentary that aired on BBC Radio 4 in the U.K., “The Sounds of Sports,” Baxter noted that the mere existence of such a program proves that there is much more going on in the sound department than meets most ears.

“I was astonished at how many nonindustry people listened to that show,” he said. “It explained how and why sound coverage is different for each of each sport is very, very unique.”