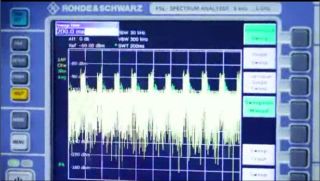 “With the Cambridge trial, the consortium hopes to explore the benefits of even more flexible regulation in the U.K.,” said Dan Reed, Microsoft’s corporate vice president of tech policy and extreme computing.

“Most of the spectrum, in most of the places, most of the time, is unused,” said Professor Dennis Roberson, vice provost for corporate relations and strategic initiatives at IIT in a video plug for the project. “So we’re now faced with the crisis of people who’ve been allocated spectrum, and now they need to share that spectrum.”

The trial will “explore how mobile devices can tap into unused television channels--TV white spaces--to supplement wireless broadband and cellular networks,” Microsoft said. “The trial is designed to validate that TV white spaces can be used without any impact on traditional broadcast television in the U.K., a concept that has already been successfully explored in the U.S. and other European countries.”

U.S. broadcasters likely would beg to differ. Interference was detected during tests with Microsoft prototype white-space devices. The preliminary rules from the U.S. Federal Communications Commission contain technical requirements to guard against it, including limiting out-of-band emissions. Microsoft is among the companies trying to get the FCC to relax the limit, which the broadcast lobbies say will “gut interference protections.”

Microsoft is one of 10 companies vying to manage a white-space database in the United States, to be used by devices to identify unoccupied TV channels. Company executives, including Reed, recently met with regulators and urged them to finalize white-space rules and select a database administrator. (See “Microsoft Nudges FCC to Wrap White Spaces.”)

Microsoft and its U.K. partners have received a multi-site test license from Ofcom, Great Britain’s equivalent of the FCC. The consortium will test “streaming high-quality video and audio content from the BBC and BSkyB over the TV white spaces spectrum to a range of mobile devices, including some from Nokia and Samsung,” according to Microsoft. “The TV white spaces hotspots will include local pubs, other leisure venues, and commercial and residential premises.”

The trial will not be open to the public, but rather invited to several “planned demonstrations.” Cambridge was chosen for its development in wireless technologies as well as the architectural features of the city. Its building density is expected to demonstrate the structural penetration of broadband transmissions in the TV band.