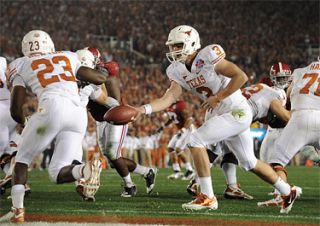 SAN FRANCISCO—Looking back at the college football landscape of our past, those forces with the biggest impact on the game were well known: the heavy-handed coach, the hard-pressing quarterback—or if you found yourself in the open-air stands in the Midwest in November—the weather.

Now, it's technology that has cemented itself as one of the more powerful forces impacting college football today.

Launching on Aug. 26, ES PN’s Longhorn Network is a 24-hour channel devoted to Texas athletics, including the University of Texas and regional high school football. For years now, college football has been a media-savvy chessboard, a place where championship games have corporate sponsors and entire teams are outfitted in logo-heavy gear.

And in the coming 2011-12 college season, the partnership has reached a crescendo, resulting in the growth of conferences, the shifting of teams and the creation of new networks devoted to college sports.

And technology continues to drive the story.

Earlier this year, ESPN took that dedication to a new level by creating a new channel devoted to covering a single state. Launching on Aug. 26, the newly named Longhorn Network is a 24-hour channel devoted to Texas athletics, including the University of Texas and regional high school football. In a deal worth $300 million, the network will also air original series, historical programming and cultural events in addition to online programming.

The creation of the network is a testament to the fan base that surrounds Texas football, and the corresponding television audience that is to follow. The creation of the channel network has few fans in the Big 12 conference, which critics say uses television to give an unfair advantage to the university. "It shows how much power ESPN can have when it jumps in bed with a powerful institution like Texas," said Jon Mark Beilue, a columnist with the Amarillo Globe-News. "It can give the sports network real leverage with other schools in the name of profit and [Texas]."

Likewise, college football will find a new home on basic cable this year when the FX network kicks off its inaugural college football season this month. The network is adding the Fox College Football Game of the Week to the network's lineup.

"Fox Sports Media Group is trying to deliver sports programming to as many new platforms as we can," said Jerry Steinberg, senior vice president of field operations for Fox Sports.

Available in more than 99 million homes, the network will air a mix of Pac 12, Big 12 and regional match-up games. In all, the Fox Sports 2011-12 schedule will include more than 200 games, including several regional matches and championship games.

The network will rely on the Patriot, a 53-foot expandable-side HD production vehicle built by Game Creek Video for its on-the-road productions. Video production and effects will be handled by a Grass Valley Kalypso, as well as 12 Sony HDC-1500 cameras with several Canon Digi Super lenses and Vinten and Miller tripods and heads. Graphics will be handled by a Chyron Duet Hyper X3, and server support will come from Sony, Panasonic and EVS, the later of which will provide several high-speed HD XT2 LSM systems.

"Audio will continue to be a signature focus," Steinberg said, with a mix of Sennheiser handheld mics, Beyer shotgun mics and Big Ears parabolic dishes. FX will also employ a cable cam and action cam on a Steadicam device "for times when we don't have room to put a vehicle on the sideline," he said.

"We're approaching [the coverage of college football] like we do all other of our football events, with the best personnel and best equipment," he said. FX is part of the Fox Sports Media Group, which covers NFL games.

In late August, Versus announced that it too would expand its college football offerings and be rebranded as the NBC Sports Network. The program will relocate from its current base in Connecticut to the New York City studio used for NBC's Sunday night NFL show.

The conference shakeup is continuing, and strong television viewership continues to be a powerful reason. "[The conference deals] happen because the Big Ten wants to attract people in Denver and Dallas and New York to its television network," said Sports Illustrated columnist Michael Rosenberg. The moves have continued "because of TV."