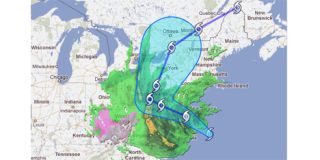 MULTIPLE CITIES: Media providers turned to all things Sandy today as the eponymous hurricane approached the Eastern seaboard. DirecTV launched a 24/7 “Hurricane Sandy Information” channel, while Google brought out a hurricane data map. Livestream, a New York concern that enables live broadcasting through the Web, rolled out a live Sandycam showing traffic in New York City, or the lack thereof (embedded below).

DirecTV’s Sandy channel comprised live broadcasts from local TV stations in New York, Philadelphia, Washington, D.C., Baltimore and Norfolk, Va. The feed was made available nationwide starting at 9 a.m. Eastern Monday on Chs. 325 and 349. DirecTV said it would provide information about evacuations, closures, cancellations American Red Cross maps and messages from other emergency agencies, until the hurricane dies down.

The storm is a Category 1 hurricane with sustained winds of up to 90 miles per hour. Landfall was expected Monday evening on the New Jersey coast, where power outages affecting as many as 12,000 people were reported by Monday morning. As many as 20,000 on Long Island ha lost power by Monday afternoon, according to published reports.

Public transit operations and schools were shut down in New York, New Jersey, Washington, D.C., and Philadelphia in anticipation of the storm surge. The New York Stock Exchange and Mercantile Exchange floors were closed on Monday; Amtrak service and commercial flights were cancelled along the Eastern seaboard.

The storm surge was expected to reach from four to eight feet along the East Coast, and as much as 11 feet in the Long Island Sound, Raritan Bay and the New York Harbor, according to the National Weather Service. Flooding was expected to persist into Tuesday.

As much as 12 inches of rain was expected inland, as well as two to three feet of snow in West Virginia. Landslide warnings were issued with the expected inundation. President Obama signed Emergency Declarations for the District of Columbia, Rhode Island, New Jersey, Massachusetts, Pennsylvania, Maryland, New York and Connecticut.