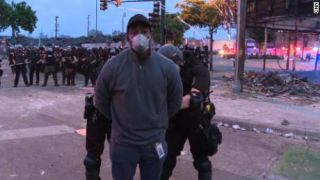 CNN reporter Omar Jimenez and several other members of his team were arrested on the air in late May. (Image credit: CNN)

WASHINGTON—The role of journalists has been heightened in recent months because of the COVID-19 pandemic and the nationwide protests that stemmed from the killing of George Floyd. With journalists on the front lines reporting on stories like these, the News Media for Open Government (NMOG) is urging Congress to pass the Journalist Protection Act.

Introduced by Sen. Richard Blumenthal (D-Conn.) and Sen. Robert Menendez (D-N.J.) in the Senate (S. 751) and Rep. Eric Swalwell (D-Calif) in the House of Representatives (H.R. 1684), the Journalist Protection Act would make the intentional bodily harm or threat toward a journalist with the design of intimidating them from gathering or reporting on news a federal crime.

PLUS: As Protests Turn into Riots, TV Becomes Part of the News

“Journalists play an important role in our nation’s democracy,” a letter from NMOG to both houses reads. “By gathering and reporting the news, they ensure that our nation’s citizens know what is going on in their communities and how the government is responding to events of the day. … Fact-based, credible news has never been more important as citizens in our country crave information about what is going on around them.”

Enacting the Journalist Protection Act would affirm the First Amendment protections granted to journalists and give federal prosecutors the ability to prosecute individuals who assault or intimidate journalists in the event state or local prosecutors fail to do so, NMOG says.