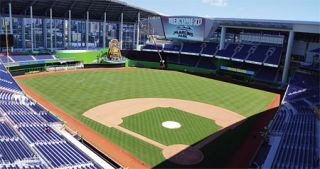 MIAMI: At the Miami Marlins scheduled season opener on April 4, the team's days playing at its former home, Sun Life Stadium, must have seemed like eons ago to the players, staff and fans attending the new Marlins Park.

At SunLife, the Marlins employed two large HD boards which were located in left field and center field in a facility the team shared with the NFL's Miami Dolphins. At their new baseball-only venue in the Little Havana neighborhood, the Marlins have created a heightened visual experience with a festive Miami flair. That resulted in the inclusion of more than a dozen boards, plus 700 LCD TVs scattered throughout.

According to Daktronics, the Brookings, S.D.-based manufacturer of the displays, the team and its "fans will be able to enjoy more video displays than they can in most of the current Major League Baseball [MLB] parks," said Kyle Adams, southeast regional manager for Daktronics.

While much of the conversation around Marlins Park has concerned the retractable roof, the team's updated roster, its incomparable (shall we say) "Home Run Feature" and the aquariums behind home plate, the team is striving to provide one of the most impressive video and game experiences in MLB.

The idea behind the all-1080i HD board installation is to create a smooth integration between the various boards that are located in different sections of the park, according to Larry Blocker, director of game presentation and events for the Marlins.

The main HD screen at Marlins Parle is this irregularly shaped Daktronics display, measuring 101 feet by 51 feet. That will "enable a smoother integration between delivering stats, player content, closed captioning, scoring and timing [as in time of day] information as well," Blocker said, "[and what else] these new boards do is enable us to get messages to the consumers in the most expedient way possible."

It's not that the new boards are necessarily "faster or slower than the boards we used in Sun Life [which were updated several years ago], but moreso that we've received more training from Daktronics," he said. "That enabled us to operate faster on the fly."

Another boost was a result of upgraded hardware and software. At Sun Life, "we used the old Venus 7000 controller, but now we use our new Daktronics Show Control System. That gives us various advantages," Blocker said of the technology, which merges control software, data integration, playback hardware and image processing technology to form a single, comprehensive production solution. "For instance, the touchscreen technology is more user-friendly, so it's easier for non-technical people to use."

That ease of use makes building content—much of which is acquired with the Sony PDW-700s and HDC-1400s—for the new system easier, because the information on the toolbar makes the interface simple to use. "It's like a Windows-based system," he said, "and that's what the majority of our technical staff will use during the games."

For instance, the software enables the user to create his buttons via a feature called scripting. "For a home run graphic, for instance," Blocker said, "you have the option of designating a graphic to one of the large boards, or all three, with the touch of a button."

SEE ALL ABOUT IT

Larry Blocker, Marlins director of game presentation and events As for the main attraction, the main board in right center field (an irregularly-shaped rectangle) checks in at 101 feet by 51 feet; the other main board, which is located at the left field foul pole, is 40 feet by 25 feet, as is the third main board, which is located behind the right field wall in a party zone called "West Plaza at Marlins Park."

There are also many other boards in the Marlin's intense presentation, like the 270-degree ribbon board that is mounted on the suite level that spans from foul pole to foul pole, which stretches 935 feet by 3.5 feet; and the field level boards on the warning track, one in left field and one in right center, that each measure 96 feet by 10 feet.

Another ribbon board runs atop the Home Run Porch in right center field. It will be used for player stats and out-of-town scores, with fantasy stats to be presented during pre-game activities. Spanning 205 feet by 3.5 feet, it encompasses eight individual boards that can be presented "as all one display that we can use to present video of a flag during the National Anthem, for instance," said Randy Cousar, engineering director for the Marlins, "or to generating advertising revenues."

Also visible around the field are two boards above each bullpen that will display stats for relief pitchers while they're warming up.

What's most notable about the overall installation was the combination of LED technology and IPTV. That gave the Marlins a complete system to control all technology within the ballpark, according to Adams . "Not only will it keep the fans informed and entertained, but it will give sponsors the ability to promote their products exclusively, from wherever the fans might be watching."

All of the new equipment has dramatically improved the team's operation and spurred creativity.

"Our workflow is so much better," Blocker said. "For instance, the moment [Marlins star] Hanley Ramirez hits a homer, the EVS operator can log it through EVS IP Director and the content is immediately sent to all of the Avid workstations. That means the Avid operators can use it for whatever they want—spots, music videos," etc.—"and quickly work their content into the game presentation."

That's still not all of the Marlins' new in-game show. "There are other boards at the four entry ramps that will be incorporated into the game plan to offer basic information, yet are just as versatile as the other larger boards," said Cousar. "They give us unique options to show the game or convey other information to the fans."

One example was during the recent Marlins FanFest, when the crew broadcast what was going on inside the stadium, including autograph sessions and town hall meetings, to the fans who opted to stay outside, he said.

That figures to happen fairly often in sunny South Florida during ballgames or other events, such as concerts, at Marlins Park. That's where that large board outside the right field wall comes into play; located in the West Plaza, it will also carry the game broadcasts.

Not only will the board be used to market the team, it will lend to the economic impact of the plaza and the park.

"That outdoor board, along with the rest of the setup," said Cousar, "gives our crew a host of options that were never really in play at Sun Life. It's a whole new world."