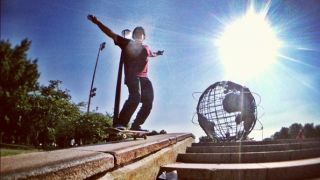 Known as the “Manual King,” skateboarding superstar Joey Brezinski takes his fans on a wild ride, every time he steps on a board.

His name dons skateboard paraphernalia from boards to sneakers. For Brezinski, showing what he can do is not enough. “Not too long ago I decided that I wanted to make a skating montage using only my iPhone,” Brezinski explains. “When I found the Schneider iPro lenses, I knew they would add that extra excitement to shots of my friends and fellow skateboard enthusiasts.”

The iPro 2X Tele allowed Brezinski to get in close to the boards, the action and the excitement of skateboarding, he says. Using the wide angle lens helped him to get more into the frame. He used the Fisheye to add an extra wild dimension to individual tricks and sequences of tricks, he says.

“Recently, I took my iPhone and iPro lenses for a ride in my Venice neighborhood,” says Brezinski. “I followed my friends, capturing their moments while getting tricks, sequences and action shots.”

He also grabbed footage of new boards and shoes that he is about to release as well as of his pug named Pizza. “It was all stuff I would never be able to do without the iPro lenses,” he says.

The iPro lenses enhance the iPhone Brezinski already has. Each lens easily bayonet mounts on and off and lets him capture more in every shot. The pocket-sized lens case securely protects the lenses as Brezinski rides his board over a variety of risky moves. The case, which doubles as a tripod mount, also makes a comfortable handle so Brezinski has a firm grip on his camera, as he takes the iPro System through the ride.

Some of the first footage Brezinski shot with the iPro lens system was done in France as part of a tour and can be seen on the Red Bull USA website. Recent footage is on Instagram and available via Facebook and Twitter pages of sponsors like Cliche, Autobahn, Diamond, Andale Bearings, Val Surf, Red Bull, Skatepark of Tampa Party Team, Independent, Seige Audio, So Rad Clothing, Tensor and Puma.