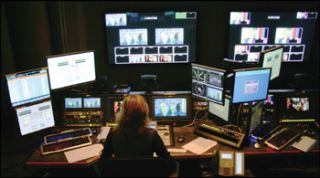 HAMILTON, N.J.: Scheduling commercials on a single TV channel is so 20th century. Today’s broadcasters need to manage linear ads on their DTV channels along with nonlinear ads for new distribution platforms like websites, VOD, and mobile services.

To meet this 21st century challenge, vendors of traffic and billing software have taken one of two approaches. Some offer software focused on ad sales, traffic, and billing, as well as performance analytics to boost revenues—and they’ve upgraded these products to support the multichannel/multiplatform environment.

But other vendors insist that in this multiplatform era, you can no longer confine traffic to the sales office. They incorporate traffic and billing into broader, enterprise-class Broadcast Management Systems (BMS) that provide an intelligent backbone that encompasses the entire broadcast chain—including program acquisition and scheduling; media asset, metadata, and rights management; transferring content to play-out servers, verifying as-runs, and billing advertisers.

MERGING TRAFFIC
Used by over 226 media outlets, including virtually all U.S. public stations, Myers ProTrack BMS software offers a cohesive approach to managing advertising and programming throughout the broadcast workflow.

“Our platform helps broadcasters sell and manage advertising in the context of the programming they offer on all their linear and nonlinear channels. Targeted ad placement ensures a better ROI for advertisers,” said Crist Myers, president and chief executive officer of Myers Information Systems, Northampton, Mass. “ProTrack also saves broadcasters money by fostering greater operational efficiency throughout the broadcast chain—for example, by strategically moving media to and from play-out servers to maximize storage,” Crist said. “In this complex multiplatform environment, it makes financial sense for broadcasters to manage their advertising traffic as part of an integrated, unified broadcast workflow solution.”

IN THE CO-PILAT SEAT
For Pilat Media, the hallmark of their Integrated Broadcast Management System (IBMS) is its ability to handle all aspects of the complex, multiplatform media factory, including traffic, without having to add legions of new workers to run it, according to John Larrabee, vice president of the Americas for Pilat Media. “Within its centralized Oracle database, IBMS tracks the whereabouts and status of short-form and longform media all along the broadcast chain.”

Since it serves as a standards-compliant management layer over the top of the technical infrastructure, it notifies appropriate departments when scheduling conflicts or issues require attention. “If a show needs to move to a different time, then the spots scheduled to run with it must also move,” Larrabee said. “Having an integrated workflow engine like IBMS handling these kinds of details is especially efficient and financially advantageous for broadcasters.”

While the traffic and billing component can be purchased separately, Larrabee said many broadcasters prefer to buy the entire IBMS solution rather than several smaller third-party products. Media companies that use Pilat Media globally include CBS, Media General, ESPN Star Sports, and Discovery.

GAME CHANGER
Harris Broadcast’s Denver-based media software division has been developing new modules, like Live Log, to extend the functionality of OSi-Traffic—a full-featured traffic and billing system that harnesses a relational database for multichannel, multi-station management. Live Log enables broadcasters to accept, schedule, and air ads even when the ads arrive within five minutes of airtime. It leverages the BXF protocol that optimizes messaging throughout the traffic, automation, play-out and verification workflow.

“With Live Log, broadcasters don’t have to ‘lock their logs’ well in advance of air anymore. They now have the flexibility to accommodate late orders they previously didn’t get or declined because they couldn’t process them in time. As advertisers realize broadcasters now have the technical capability to support this, it could be a real game changer—converting last minute avails into revenue,” said Scott Criley, director of new media solutions for Harris Broadcast. “Provided the spots arrive ready for ingest on the play-out server, the order can be processed automatically from within the existing traffic and billing workflow.”

Harris has also completed Phase I of the integration of its OSi-Traffic platform with Google DFP, a third-party system that handles Internet banner ads for broadcasters. If an ad campaign mixes onair spots and Internet banners, this module parses out the banner ads and sends them to Google DFP, which executes their placement. The Google DFP module is now live currently being rolled out to the Harris customer base.

“Matrix is like a ‘GPS’ giving users turn by turn navigation in the direction of their strategic vision so they can get to their sales objectives faster and more efficiently,” said DJ Cavanaugh, the founder and chief executive officer of Matrix Solutions, in Pittsburgh.

As a traffic/billing software overlay or plug-in, Matrix helps media sales professionals identify their top advertisers, those with growth capacity, and potential churn-accounts for more effective CRM at the station, group or enterprise level.

Broadcasters can track sales and spot trends like the types of advertising customers are buying on multichannel linear and nonlinear platforms like websites and mobile. The latest version has a graphical user interface and generates sales reports on all types of criteria, such as market segments or categories. It’s also cloud-based, offering road warriors access from mobile devices.

OPTIMIZING REVENUES
Cindy is a customizable, modular system that tracks and manages multichannel/multiplatform commercial sales and traffic at individual or group stations. It’s based on a centralized database that dynamically updates, giving users the most up-to-date status of their inventory and schedules.

New Cindy modules dynamically track and update all aspects of linear ad placements as well as new platforms like online and mobile. Astral, a Montreal-based media group has been using Cindy for more than five years to manage traffic and billing for its commercial TV stations and websites.