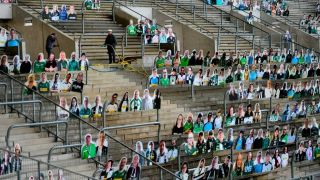 Bundesliga has attempted to make up for not having actual fans in the stands by placing cardboard cutouts throughout the stadium. (Image credit: Getty Images)

Live sports are back, just not as you remember them prior to the outbreak of COVID-19. This past weekend saw some of the first live, broadcast TV action of multiple sports, highlighted by the return of NASCAR, a PGA golf match for charity and the German Bundesliga professional soccer league.

NASCAR and Fox Sports worked together to bring the first of seven races over the next 11 days to TV viewers on May 17 at the Darlington Raceway in South Carolina. Kevin Harvick was the winner, and he acknowledged the different circumstances of the race, saying that he missed the fans in the stands.

NASCAR’s live race schedule continues on May 20 from Darlington, with other races scheduled up to May 27 at this point. Additional races are expected to be announced.

NBC Sports, meanwhile, was tasked with bringing live golf back to its airwaves on May 17 as well, just in a different format. Rather than a full-fledged tournament, top professionals Rory McIlroy, Dustin Johnson, Rickie Fowler and Matthew Wolfe played a “teamed skins” competition at Seminole Golf Club in Juno Beach, Fla. The players carried their own bags, had an audio pack attached to capture their dialogue and practiced social distancing.

The broadcast crew also adjusted to the new realities. Commentator Mike Tirico called the action remotely from his home in Michigan, while other commentators Rich Lerner, Paul Azinger and Gary Koch worked from the PGA Tour’s production facility in St. Augustine, Fla. On the course, a skeleton crew manned six cameras and utilized LiveU technology to capture the action. The broadcast also featured some call-in interviews, including Bill Murray and President Donald Trump.

PLUS: How Remote Production Can Help Get Live Sports Back on the Air Amid COVID-19

The skins match raised money for charity, with the winning team of McIlroy and Johnson earning $1.85 million for the American Nurses Foundation, and Fowler and Wolfe earning $1.15 million for the CDC. In addition, more than $5 million was donated by event partners and individual fans for COVID-19 relief efforts.

Another live golf match will take place on May 24—with Tiger Woods, Phil Mickelson, Peyton Manning and Tom Brady—before the PGA Tour is slated to return to its usual schedule (sans fans) in June.

Across the pond in Europe, Bundesliga, Germany’s professional soccer league, returned with live matches, again with safety guidelines for both players and broadcast crews, which included a limit of 300 people allowed in the stands among teams and staff, but no fans—though the league tried to address that by putting up cutouts of fans in the stands.

Six games were held over the weekend, with Fox Sports’ broadcast of the Borussia Dortmund vs. Schalke match earning a record .33 rating. Bundesliga is expected to continue playing, and broadcasting, the remaining nine weeks of its season.