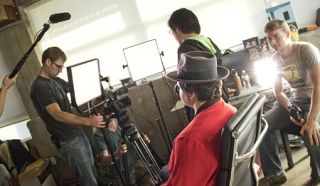 “We’re tech geeks at heart,” Wongsaid. “So I had been following the development of LED lighting closely for some time. When it came time to equip ourselves, Litepanels LED lights were at the top of our list. We are now using an array of Bi-Color and daylight 1x1s, a Sola 6 Fresnel, MicroPro on-camera light, as well as the 1K Hilio on our projects.”

Wong and team were drawn to Litepanels lights because their shooting schedule and style requires them to move extremely fast in order to make their days. On the last day of their recent shoot, the trio was out in the desert and ran out of sunlight.

“We simply took a battery operated MicroPro, bounced it into a bounce board and used that as a keylight. That combined with the low light sensitivity of the Sony F3, allowed us to get the last few shots we needed.”

As with their other projects, “Video Game High School” will run on the company’s YouTube channel as well as their upcoming portal site http://rocketjump.com. Wong’s http://youtube.com/freddiewand freddiew2 have 2.6 million subscribers and have over half a billion video views to date.