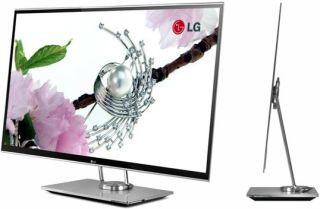 NEW YORK: LG Electronics debuted its new line of LED 3DTVs with NANO lighting technology in the United States this week. The sets are said to have particularly clear, sharp, bright, smooth pictures rendered by a light-emitting diode array through a “thin film printed with a proprietary light-dispersion pattern,” LG says. The displays also sport an antireflective panel that further enhances picture quality.

The NANO LED technology made headlines in August when LG unveiled it at IFA in Berlin. This week’s U.S. debut was in anticipation of the Consumer Electronics Show in January.

LG said the NANO sets have improved localized dimming through the application of “Micro Pixel Control,” which manipulates the individual LED blocks. The technology is also said to enhance color and generate deep, dark blacks.

Screen sizes range from 47- to 60-inches with a depth of less than one inch. Two refresh rates are offered--240 and 480 Hz. The sets are also undergoing THX 2D and 3D display certification. The 3D glasses will be sold separately. Additional details including specs, pricing and availability will be announced at the 2011 CES.