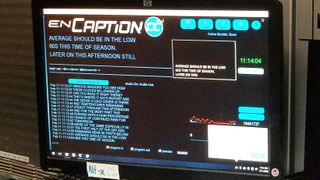 SOUTHFIELD, Mich.—To streamline its efforts to meet FCC mandates for closed captions, KTBS-TV3 and KPXJ-TV21, which are owned by KTBS LLC and based in Shreveport, La., installed the enCaption4 automated closed captioning system from Enco.

The stations’ setup prior to acquiring the enCaption4 was the Electronic Newsroom Technique, which converts dialogue on a teleprompter script into on-screen captions. However, this would eliminate closed captioning of informal banter, field reporting or other on-air presentations not included in the teleprompter.

KTBS/KPXJ Assistant Chief Engineer Bob Shafer said that between the two stations they are producing 51 hours of local news programming a week, and much of it contains unscripted content.

Shafer said that the enCaption4 system has produced highly accurate captioning, with caption data sent to two DTV closed captioning encoders that embed the captions into the program video for broadcast. The system also has speech-to-text artificial intelligence that can learn from ingested lists and scripts to correctly spell unusual words, like names and local places. It also doesn’t require the creation of speech pattern profiles for every person speaking, per Shafer.

In the event that two local shows are airing at the same time, enCaption4 handles the flagship over-the-air signal, while the other program audio switches to the alternate teleprompter-driven captions path.

Shafer said that KTBS/KPXJ is likely to acquire a second enCaption4 unit at some point in the future.