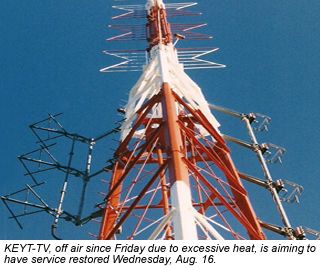 KEYT-TV, the ABC affiliate serving Santa Barbara, Santa Maria and San Luis Obispo, went back on air Wednesday after an air conditioning problem and unusually high temperatures took the station’s transmitter out of service and the station off air Aug. 10.

The transmitter outage left over-the-air viewers and all cable viewers in Ventura County without reception. As of 1:35 p.m. on Aug. 15, service was restored.

According to Dave Williams, chief engineer of the Smith Media-owned station, the annual summer temperature inversion on Broadcast Peak, home to the station’s transmitter site, sustains triple-digit temperatures around the clock. Broadcast Peak is located between Santa Barbara and Santa Ynez, CA, and the station’s transmitter site is at about 4000ft, which is within the temperature inversion zone.

When the air conditioning malfunctioned, excessive heat damaged the driver of KEYT-TV’s Harris transmitter, taking the station off air, said Williams. The station’s transmitter is at least eight years old, he added.

When Williams determined the source of the outage, he removed the driver and sent it to Harris Broadcast for repairs. The repaired driver was returned and repairs were completed by early afternoon Wednesday, said Williams. At about the same time, repairs to the transmitter site air conditioning system were completed.

A report on the station’s website directed viewers who wanted more information to call or e-mail Williams. In a recorded phone message from Williams, the chief engineer reported on the status of repairs and estimated that the station would be back on air Wednesday morning. It concluded with Williams expressing an optimistic sentiment: “Although all my wishes don’t come true, maybe this one will.”

It appears his wish came true.