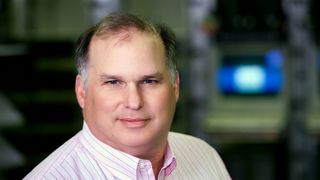 The past five years have been hard on many previously dominant equipment vendors serving the broadcast industry, but none have felt the dramatic shifts in HD editing technology offerings as much as Burlington, Mass.-based Avid. Once a pioneer in nonlinear editing, the company fell victim in recent years to its own dominant status and watched helplessly as new players like Apple and Adobe Systems began to gain ground with TV news, reality TV and long-form program editors.

It was nearly five years ago that Gary Greenfield was brought in as chief executive officer to stem the incoming competitive tide and get Avid’s proverbial house in order. It was not a job for the light-hearted. Greenfield instituted a number of cost-cutting initiatives to get the company back on track. There was some downsizing of staff and a consolidation of divisions to help make Avid a “lighter, more integrated company;” one able to compete in a market that has clearly moved away from proprietary systems.

“It’s no secret that we’ve opened up the products to break way from the perception of a proprietary system,” Greenfield said. “We’re also enabling third-party technologies to seamlessly work with our products. Avid is definitely more open than ever, and we’re just getting started.”

Part of Greenfield’s strategy is to bring Avid back to its core and shed the company’s “non-essential” or under-performing parts. In July the company announced that it was selling off its struggling consumer business. This resulted in the sale of audio assets (such as the “M-Audio” brand) to inMusic, the parent company of Akai Professional, for approximately $13.9 million; and some low-end video editing products to Corel Corporation for $3 million. At the time Avid also reduced its workforce by 20 percent.

“The consumer business was clearly a slow growing (actually negative growing) part of our company for several years,” Greenfield said. “It was holding back our overall growth. Since we sold it, we have reported a five percent growth (worldwide) in our other core businesses overall.

“[The consumer products division] had developed some great, fun products, but it was a distraction and not really in Avid’s DNA to be playing in that space,” he said. “Our biggest strength is in our professional products. With the simplification of our company organization, we’re now well positioned today for new growth.”

Clearly Avid has benefited from a loyal customer base, including major networks like NBCUniversal, which used a number of Avid products during the recent London Olympics (as it has for the past several Olympic broadcasts) as part of an innovative, remotely accessible file-based workflow. The network’s Highlights Factory for example, was based on Avid Interplay Media Asset Manager (leveraging Avid’s acquisition of Blue Order) and ISIS storage products, as well as Avid’s Media Composer. Other international broadcasters used Avid technology on site in London for a variety of file-based workflows.

“We think our customers loyalty in Avid product is about the value they receive when deploying our file-based products and workflows,” Greenfield said. “It’s also about the service levels we provide. We recognize that it’s not just about our technology, but equally important is how we work with our customers and partners to ensure they are successful and have the tools they need.”

The sluggish economy has caused broadcasters to resist buying new equipment to any large extent, Greenfield acknowledges, but the current political season and the Olympics have improved stations’ outlook going forward.

“We’ll see stations investing again when they start to gain confidence for the future,” he said. “We’re starting to see that confidence being reflected in the market. There are some encouraging signs from the consumer side and that makes broadcasters more comfortable to start buying equipment again.”

Much of Avid’s woes over the recent past have come as a result of Apple’s Final Cut Pro editing software, which many found easier to use a lot cheaper than Avid’s products. However, the most recent version of FCP disappointed a lot of existing users and Apple‘s decision to discontinue producing its Xsan networking products caused many in the professional community to take a second look at Avid.

Indeed, some have said that Avid feared Apple for many years, but, with Apple seemingly moving away from the professional industry, Greenfield said Avid doesn’t anymore.

“I wouldn’t say that we are not still sensitive to the competition, but what has changed is that Avid has said we’regoing to be the innovators,” he said. “Our Media Composer has really re-emerged as a product of choice because of the new features it includes, like stereoscopic 3-D editing and improved the efficiency for multiplatform content development.

“From my standpoint, Apple has been backing away from the professional for some time,” Greenfield said. “Also, their service model was not what professionals need to stay in business. With our closing of the consumer division, the message that we’re delivering is that we’re doubling down on the professional industry. We’re here to stay.”

Greenfield said that revenue for Avid’s Media Composer product line in the past quarter was up 40 percent year on year (30 percent increase in units sold of professional editing solutions), due, he said, to Avid’s efforts to improve its accessibility to more people. This has resulted in a software-only version of Media Composer and other products.

“We’re talking about asset-based workflow, which is really a different way of thinking about how you monetizing your digital assets,” he said, “but more importantly, it’s a reflection of all of the change that’s going on. This industry is at a time of a great change, so Avid has to figure out how to help make that change as smooth as possible for our customers. When broadcasters are successful with our technology, we’re successful.”

At IBC next month Avid will highlight a number of new products it introduced at NAB in April. This includes the new Interplay Sphere, a cloud-based software and hardware system designed to help users create and publish content to a variety of delivery platforms.