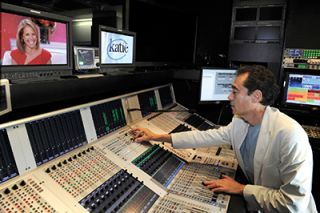 While the show began as a same-day “live to tape,” the plan is to eventually take the show live. The show is broadcast Mondays through Fridays in ABC TV Center’s Studio TV1 before a 140-member studio audience. Some stations will carry the show at 2 p.m., but most will air it at 3 p.m. Daily production makes it possible for Katie to feature very timely, topical social issues, trends, and news stories.

The Audio Control Room for “Katie” “In designing this facility, our goal was to give the production staff the utmost flexibility to handle whatever type of content or format they needed to produce a very entertaining, informative, and appealing show,” said Bill E. Rego, general manager, live production and special projects for ABC Broadcast Operations & Engineering. “In the year leading up to the show’s debut, we carefully evaluated our equipment options and selected the best available technology that met that goal,” Rego said. “The result is a state-of-the-art studio facility with innovative features and capabilities that give the production a distinctive look as well as a technically versatile, powerful infrastructure.”

MAJOR UNDERTAKING
The Katie show is a key priority for the entire Disney ABC Television Group, and a large team from across the network worked with BO&E to launch the show, according to Todd Donovan, senior vice president of ABC BO&E. Rego is a member of a large engineering team in charge of the Katie project, including David Linick, manager of broadcast engineering, and Robin Thomas, group director of engineering for ABC Broadcast Operations & Engineering. The BO & E team was tasked with the design and construction of the facility and systems integration was handled by The Systems Group of Hoboken, N.J.. The process began with an “extreme makeover” of the 7,000 square-foot studio space formerly used by “Who Wants to Be a Millionaire,” which has since moved to a new location. The Katie facility also includes a production control room, (called the “TV-7 Control Room Complex”), Media Center, and a pre-production facility located in an adjacent building at 147 Columbus Ave. These areas are interconnected by a private, dedicated, high-performance network.

“This facility’s infrastructure enables a file-based workflow rivaling that of network news operations,” said Linick. “From the show’s sophisticated, contemporary set, Katie can interview people in remote locations, display select content from Twitter or FaceBook as well as Skype calls; and integrate video clips, graphics, animations, and other media-rich content.”

“The two smaller video walls can be raised and lowered as needed on a segment by segment basis,” Linick said. “The 80-inch touchscreen can be turned around to function as a set piece. And the innovative, automated set features a ‘home base’ platform that can relocate to other areas [via a cable track under motorized control] whenever additional space is needed, for example, for a musical performance.”

The camera complement includes three Ikegami HK-725 (native 720p HD) studio cameras on pedestals, one Ikegami HK-725P handheld on a Techno-Jib, and two Ikegami HK-725Ps that can be handheld or as one handheld and one on steadicam to capture shots of the audience or their interactions with Katie Couric. Studio cameras sport Canon or Fujinon lenses, including 60x and 27x. The handhelds have Canon 17x7.6 and 11x4.7 lenses.

TV-7 Control Room Complex for “Katie” The Audio Control Room is fitted with a 60 fader Studer Vista 9 Audio Console, tied to the Evertz EMR Audio router via redundant MADI interfaces. Studio audio is managed with a redundant Riedel Rocknet system, which allows the main program audio mixer and front of house PA mixer to share all the audio resources independently.

“We converted an adjacent control room into a Media Center, which now houses a 22-channel EVS XS server that records incoming feeds, commercials, and new content for play-out during the show,” said Linick. He added that IPEdit To Air allows edits and fixes to be made to the show prior to broadcast distribution.

“One of the biggest technical challenges we faced was defining and implementing a file-based workflow that allows files to move seamlessly between the EVS XS and Avid’s in the Columbus Avenue building,” Rego said.

FILE-BASED WORKFLOW
Situated in the Columbus Ave. pre-production facility is a wide array of Avid gear, including an Avid Symphony 6 with tools for craft editing, color correction, effects, and mastering. “Video clips needed for the show— such as a featurette giving the bio of a celebrity guest— are created here and transferred to the EVS XS server in the Media Center,” Linick said.

The Symphony along with several Avid Media Composers share access to 64 TB of ISIS online storage and 144 TB of near-line storage, as well as Avid Interplay for media asset management, transcoding, and file-based browsing and transfer. The facility also has extensive Mac-based graphics, including Adobe Creative Suite, primarily for creating broadcast design elements.

“It’s been a challenge to combine new technology and a new production staff in a brand new, advanced facility and have it all come together in the right way at the right time.” Linick said. “The infrastructure for success is certainly in place.”