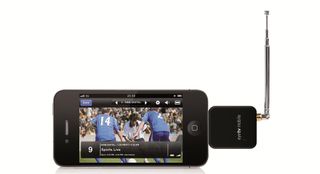 The $100 accessory connects to iOS devices directly via the dock connector. The tuner receives mobile TV signals via a “miniature antenna for use on-the-go, or a rod antenna, which provides broader range at home or in the office,” according to the announcement. It works with a free companion app that also provides DVR-like features such as pause and resume, as well as an electronic program guide.

The iOS peripherals represent the second major Dyle consumer receiver debut. They follow the Samsung Galaxy S Lightray 4G, the first smartphone with mobile DTV reception capability. The Lightray was introduced in early August with a list price of $459 plus tax, with no annual service contract service starting at $40 a month. It’s available in 12 Dyle markets.

Korean consumer electronics giant LG released a standalone mobile DTV receiver in 2010, but the $250 clamshell TV didn’t gain much traction in the market, in part because mobile DTV hadn’t officially been launched. Dyle went live this year, while generic mobile DTV was launched formally at an event in Washington, D.C. in September.

The EyeTV Mobile features a miniature aerial, a rod aerial with magnetic base and removable suction cup, quick-start guide, and a USB charging cable (intended for use with the EyeTV Mobile battery, not designed to charge an iPad). The EyeTV Mobile app requires iOS 5.1 or newer, and the accessory works with the fourth-generation iPod Touch, the iPads 1, 2, and 3; iPhone 4, and iPhone 4S. It is also compatible with the newest iOS devices through adapters that connect the accessory, including the iPhone 5, 5G iPod Touch, 4G iPad and iPad Mini.

The EyeTV Mobile accessory is priced at $99.95 and is available from Elgato, Amazon, and other retailers. The companion de-encryption app is available at no charge in the App Store and can be activated immediately without a subscription fee, “which is subject to change at any time,” Dyle said. Dyle executives have said that the service would be free through 2012, at which time MCV members would evaluate the business model.

Mobile Content Venture’s 300 stations include those from Belo, Cox Media Group, E.W. Scripps, Gannett, Hearst Television, Media General, Meredith, Post-Newsweek Stations. and Raycom Media, all of which are part of the standalone entity known as Pearl, LLC, as well as Fox, ION Television and NBC.