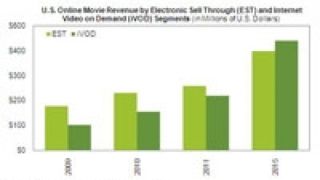 Internet movie video on demand (iVOD) revenue in the United States will surpass electronic sell-through for the first time ever in 2013, according to a new forecast from IHS Screen Digest.

According to Arash Amel, research director of digital media for IHS, U.S. consumers online began embracing iVOD in 2010 and shifted their spending from buying movies to renting them.

“Together with the continued popularity of subscription-streaming service Netflix, we are witnessing a new access model appear for online movies in which library titles are consumed as part of an all-you-can-eat subscription, while new releases are rented,” Amel said.

The Apple iTunes store has seen its new devices, the iPad and new Apple TV, significantly drive the iVOD business, according to IHS Screen Digest. ITunes held its 55 percent share of U.S. movie iVOD in 2010 in the face of tough competition; although, its movie electronic sell-through market share eroded to 74 percent following Microsoft’s entry into that business. Other players also are throwing their weight behind iVOD, including Wal-Mart, which is an emerging player.