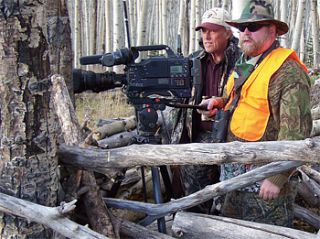 CAPE GIRARDEAU, MO.
For those acquainted with adventure television programming, the "Outdoorsman" moniker is usually equated with one individual—Buck McNeely—and with good reason. For the past 25 years, McNeely has crisscrossed the globe with his television show "The Outdoorsman" with Buck McNeely, and captured the attention of avid hunters and casual viewers alike.

McNeely sets up a shot at the Crazy Horse Memorial in the Black Hills of South Dakota. "The key aspects to the show's success are its environmental and conservation aspects, and its travel and tourism elements," McNeely points out. "There's a lot of fascinating content even for the people who aren't inclined towards hunting shows."

McNeely's been inclined towards hunting since he was young. As a mass communications major at Southeast Missouri State University, he incorporated his love of the wilderness with an interest in television production into "The Outdoorsman". The first four episodes aired on cable access, and featured stories on fishing and hunting in the local area. Viewer response was enthusiastic. A syndication deal was cut and soon "The Outdoorsman" went international, shooting in such far-flung locales as Siberia, Brazil, Costa Rica and Africa. In the process, McNeely would discover that shooting in the Arctic tundra and the sweltering jungles of South America makes Missouri's extreme seasons seem temperate by comparison.

"Without question there was a learning curve. I had to learn a little bit on every shoot and adapt and develop skills that are still in play today," says McNeely.

The earliest lessons McNeely and his team learned were to have the camera ready at all times and to focus on getting footage of the game. "Adventure photography is the toughest production scenario in the industry," he adds. "Unlike a studio shoot where you fire up the lights and let your talent do its thing, the animals did not ever read my script. We're totally at the mercy of Mother Nature, and if she decides to create havoc with the weather or the animals, you can come home with nothing but a bunch of scenic shots because that's all that was presented to you."

Shooting in the Arctic-level cold is a common challenge for McNeely. Location photography for "The Outdoorsman" is structured in a way that allows McNeely and his cameramen to work around almost any situation presented to them. Whether they're hunting brown bears or fishing for marlin, each episode is written in an "ass-backwards" fashion, as McNeely puts it: Get the animals or the fishing sequence and then write the story and produce the show based on the footage, "whereas most of the time you write the script then shoot the show." In the aftermath of the kill shot or the catch, after the animal's been dressed and removed, McNeely and cameraman John Helgran will stage the approach and the setup. "That's the Hollywood part," McNeely admits.

In the event of extreme weather, different locations require different contingencies. Cold or humid environments call for rain slicks and hair dryers to keep the camera dry. Remote production relies on the use of generators to keep the batteries charged.

Still there's been more than a few technical hiccups over the years—from breakdowns to loose screws to water damage—even as McNeely consistently adapts to newer, more efficient technologies. From 1985 to 1990 "The Outdoorsman" was shot to 3/4-inch tape using a camera tethered to a field VTR. His cameramen needed to be strong enough to hump the camera, the VCR and a tripod through a swamp or two feet of snow. In 1990, he upgraded to a far lighter Beta SP and shot with that format until 2007. When "The Outdoorsman" went high-def in 2007, the DVCPro HD Panasonic HDX900 and the HVX200 entered the mix.

The tape-based HDX900 sports a Fujinon 22x7.8mm telephoto lens with 2x extender, and serves as McNeely's primary camera. The HVX200 is used only for close-up and medium-range photography, but still works enough to warrant packing two 64GB, two 16GB, and two 8GB P2 cards when in the field. "If I find myself in an extreme cold scenario, I'll shoot with the solid state P2 cards over the tape," he reports.

Spotting shots with outfitter Dave Holbrook and the Panasonic HDX900. When shooting with P2 media, McNeely swears by his Nexto NVS2500, a compact, mobile storage device for video. "That device is such a lifesaver in the field because you're able to dump your files so you can reformat the card and keep shooting," says McNeely, who operates with two 500TB Nexto units. "They really came in handy on our last Costa Rica trip, where we had the ability to clear off the cards and reuse them again and again over the course of the day."

Another one of his favorite field gadgets is a Marshall 6.5-inch LCD monitor with SunBrite Technology. "Back in the old days before we had mobile field monitors we'd just review it on the viewfinder of the camera," he recalls. "Now I use my Marshall monitor not only for shooting real time but for playback. What's beautiful about this monitor is that it's so bright you can focus by it and check your shot in direct sunlight, without a hood."

Sunlight is something McNeely's learned to be aware of—98 percent of what he shoots outdoors is in available light. "Dawn, dusk and low light conditions are certainly challenging. Oftentimes game is moving at that point so you have to be aware of camera angles, sun position and shadows." The other two percent of the time he's using either a Litepanels Micro or Micro Pro for low-light situations.

There's a careful approach to what McNeely does every week, not only in producing an entertaining television show, but also in the work he does as a game hunter. All of the animals taken down in "The Outdoorsman" are donated to local tribes or otherwise utilized in their entirety. Nothing is wasted, nothing is left behind. "In the United States and worldwide, the hunter is still an important aspect of the game management programs," he notes. "Sometimes people need to be reminded of the importance of man's role as a predator in nature."

That's something anyone who tunes in to "The Outdoorsman" is unlikely to forget.