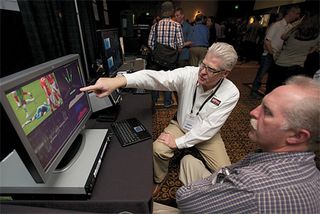 INDIAN WELLS, CALIF.: If all engineers were chocoholics, the final agenda for the 2012 Hollywood Post Alliance Tech Retreat this month could seem like an eye-popping visit to Willy Wonka's Chocolate Factory.

Across several days of panel discussions, roundtables, seminars, demos and more than 50 exhibitors, the Feb. 13–17 HPA confab at the Hyatt Grand Champion in Indian Wells, (near Palm Springs), Calif., on topics ranging from spectrum rededication to next-gen colorization, it seems virtually every major player in broadcasting and related industries will be in attendance.

The HPA Tech Retreat offers both informative sessions as well as tech demos. A pre-retreat seminar from digital video icon Charles Poynton on "The Physics of Image Displays" gets things rolling early. Poynton, a SMPTE Fellow, has written and taught extensively about color and evolving digital systems. His three-and-a-half-hour Monday seminar begins at 3 p.m.

Another industry icon, Mark Schubin, the technology consultant, blogger and broadcast engineer, who has served as the Tech Retreat's program chairman since 1997 will conduct the popular "Technology Year in Review" session annually. "The overall theme this year basically comes down to 'someone will be there who knows the answer,' Schubin said. "We'll have experts on everything from the lens to the viewer—and we don't leave out audio, either."

Tuesday (Feb. 14), the Advanced Television Systems Committee will explore the next generation of broadcasting—ATSC 2.0—in the afternoon, while HPA experts in an all-day "Snowflake" supersession will consider the myriad versions of emerging workflows. "They began the 'snowflake' supersession last year and are continuing it," Schubin said. "The term 'snowflake' is used because, like snowflakes, no two workflows seem to be exactly alike."

The main program gets underway on Wednesday (Feb. 15), featuring cameras for TV and cinema in the morning… broadcast issues and trends (i.e., Connected TV with NAB's Skip Pizzi) after lunch… and a look at home media ecosystems. The morning session of "4K Cameras and their Workflows" feature panelists from ARRI, Canon, JVC, Panasonic, RED, Sony and Vision Research. "Is 4K good? Is it important? Does it have a bad side? What exactly is 4K?" prompts Schubin, who will moderate the panel.

Remote, quickly retrievable server storage and similar cloud applications for TV stations and others will be discussed during the Wednesday and Thursday Breakfast Roundtables (7:30–8:30 a.m.) in "Cloudspotting and the State of the Art." Al Kovalick, a technology analyst at Avid and founder of Media Systems Consulting, said "cloud [technology] will eventually affect virtually all broadcast operations, but it won't happen quickly."

Similar to the off-site storage scenario that consumers are now deploying to safeguard their personal digital content in lieu of their own hardware, the cloud can be also be tapped for professional resource management, such as broadcast operations. "Clouds to me, and to most people, are a combination of servers, storage and networking," Kovalick said. "We can now use the cloud to host Web-based applications—or a variety of media services like transcoding—that could run on a public or private cloud."

Barco Digital Cinema will detail its new Auro3D audio system, featureing an 11.1 channel configuration. Also on Wednesday during the 1 p.m. Broadcasters Panel, Mark Aitken will discuss the pending proposal for spectrum aggregation and collaboration with wireless carriers (and elaborate on it more informally at the Thursday and Friday Breakfast Roundtables). Aitkin is vice president of Engineering & Operations for Sinclair Broadcast Group.

The CALM Act regulating audio levels for commercial spots became federal law this winter, although it doesn't take effect until next year. But will the Commercial Advertisement Loudness Mitigation Act really do what it's supposed to? Bruce Jacobs, chief technologist at Twin-Cities Public Television in St. Paul, has apparently made a discovery that has loudness experts scratching their heads, according to Schubin: "The exact same signal will display substantially different 'loudnesses'— depending on whether it's decoded as stereo or as surround sound!" Jacobs' half-hour session is Thursday at 9:30 a.m.

Barco Product Marketing Manager Tom Bert said while the introduction of digital projection has spurred a revival in 3D movies, cinema audio has been evolving very slowly. "As George Lucas put it, 'sound is 50 percent of the movie experience,''" said Bert. "Still, the industry remains uncertain on how to properly implement a new 3D sound experience." Auro-3D was designed to provide an immersive audio experience, while being backwards-compatible. "There's no 'chicken and egg' problem here, which has blocked the introduction of similar new technologies," Bert said.

Friday's final day includes the annual Washington Update within the Breakfast Roundtables, followed by a 9 a.m. session on SMPTE's latest initiatives—including accessible media for the hearing- and sight-impaired. Friday also includes a joint presentation from NHK and Dolby on whether color encoding really needs to be rethought for Ultra-High Definition TV—which boasts 16 times more pixels than 1080p. The findings, Schubin suggested, may surprise retreat participants.

For more information on the HPA Tech Retreat, visit hpaonline.com.