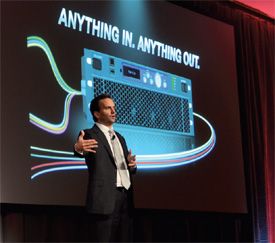 "We believe content is the richest and most diverse it's ever been," said President Harris Morris at the company's NAB Show press conference. On the other hand, "we believe a lot of content doesn't reach its full potential."

To that end, the company is launching Selenio, which it touts as "the broadcast industry's first integrated media convergence platform."

Harris partnered with LG Electronics, WRAL-DTV, Roundbox and iSet at the show to demonstrate new applications for Mobile DTV, including 3D, EPGs and digital signage.