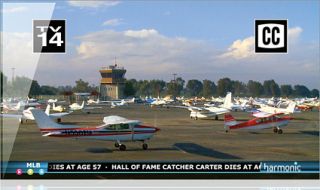 SUNNYVALE, CALIF.: Harmonic is all set to remove the wraps from its latest product, ChannelPort, at the NAB Show. It's described by the company's chief executive officer, Lawrence Kaplan, as the first entry in the "second-generation of 'channel-in-a-box' devices."

This original "channel-in-a-box" concept was introduced several years ago as a way to allow television broadcasters to economically add additional program streams. However, as pointed out by Kaplan, many of these implementations didn't live up to expectations or were too difficult to use.

Harmonic ChannelPort is offered in three confi gurations to tailor it to a customer's exact needs. "Such products were conceptually a great idea," said Kaplan. "But you have to question how they came to market—all of them came from automation companies. They wouldn't work with a station's existing automation system, they had proprietary graphics, and aside from compatibility issues, there were stability and reliability issues and also high power consumption associated with these systems."

Kaplan explained that his company examined the strengths and weaknesses of these initial approaches to automated content delivery to come up with a better approach before entering the marketplace with such a product.

"Ours is a second-generation device," said Kaplan. "ChannelPort is not a 'channel-in-a-box,' but rather an 'enabling platform' for integration of any relevant function to a given channel. We see it as a server node in a geographically distributed network."

ChannelPort was initially launched at the IBC Show with the moniker "ICP," Kaplan said. It was later rebranded ChannelPort and will be making its U.S. debut at NAB.

Kaplan stated that ChannelPort was designed to connect with existing Omneon video file servers and run under just about any present day station automation system.

"It's 'plug-and-play' into any Spectrum-equipped facility," said Kaplan. "And it's absolutely compatible with any automation system that can control Spectrum servers."

As for graphics, ChannelPort is way ahead of the curve there too. It supports such standard tools as Adobe Creative Suite to ensure compatibility with all standard graphics formats, and this approach also provides graphics designers with familiar ground on which to build templates for a full range of on-screen graphics, ranging from simple branding logos to live text.

Larry Kaplan, offi ce of the CEO, Harmonic and co-founder of Omneon Kaplan explained that reliability problems experienced by users of some first-generation "channel-in-a-box" packages were not an issue with ChannelPort, as it is built on Harmonic's successful Spectrum platform which was engineered to avoid single points of failure and to allow the 'hot-swapping' of failed components. Low power consumption and the resulting smaller amount of heat generated are also seen as enhancing ChannelPort's reliability.

"It uses dramatically less power than other products—only 100 Watts per channel," said Kaplan. "And its small size allows it to deliver up to four channels in just 1RU."

He noted that ChannelPort was being offered in three configurations to tailor it to a customer's exact needs: a standalone half-RU package that can provide existing Spectrum systems with branding capability; a unit that's integrated into a MediaDeck 7000 chassis to function as a standalone branding server, or as a fully integrated into either a MediaDeck 7000 or MediaPort 7000 chassis to function with either device as a standalone branding server with media ingest capability.

Kaplan said that Harmonic plans to start shipping initial ChannelPort orders at the end of April.

Harmonic will be in Booth SU1802 in the South Hall, upper level.