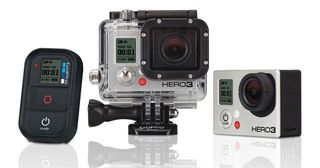 HALF MOON BAY, CALIF. – GoPro has unveiled the latest models in its Hero line of action cams, including two that capture 1080p and one that shoots in 4K.

The camera weighs in at 2.6 ounces and includes a removable housing that’s waterproof to 197 feet. The $399.99 is available for pre-order in the United States and is expected to ship Nov. 14, 2012. (Black Edition YouTube footage is included below.)

Both the Hero 3 White and Silver editions shoot video in 1080p/30fps; 960p/30fps and 720p/60fps and feature built-in Wi-Fi and remote. The White has a 5 megapixel still camera with a three frame-per-second burst mode, while the Silver shoots stills at up to 10 frames per second at 11 megapixels.