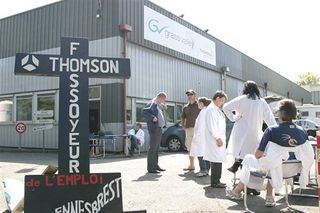 PARIS: French employees of Thomson Grass Valley are protesting the divestment of the division, according to French media outlets. Ouest France said this morning that nearly 200 employees were on strike at the Rennes facility, where production was shut down. Technicolor, the post-reorganization name for Thomson, is said to have around 400 employees in Rennes.

“The strikers have stopped work while the central works council has to address, tomorrow and Wednesday, the issue of redundancy payments or grants for training. Management of Grass Valley has planned to eliminate 625 positions worldwide, including 182 in Rennes,” Ouest said.

l’Humanite reported that 300 French Grass Valley employees demonstrated June 3 against the sale of the division. They were said to rally outside of the headquarters of France Television’s TF1, a company client. “Without Grass Valley, we can no longer maintain them,” said Jean-Pierre Ottavi, a union representative at Technicolor.

Grass Valley was put up for sale in February of ’09 when Thomson announced it would likely breach its loan covenants. The division posted a 31 percent decline in revenues between 2008 and 2009, generating a loss of around $17 million last year. Thomson completed its restructuring early this year and became Technicolor. Having failed to attract a buyer for Grass Valley as of March, Technicolor announced it would cut one-fourth of the work force--625 jobs worldwide.

Technicolor posted revenues of €691 million for the quarter ending March 31, 2010, down 24.4 percent at current currency and down 25 percent at constant currency compared to Q1 2009. Revenues excluded the Grass Valley, PRN and Screenvision businesses, all of which are up for sale.
--Deborah D. McAdams