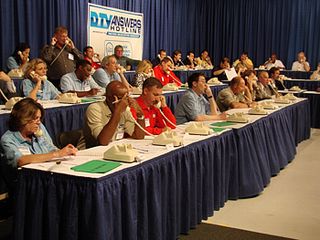 WASHINGTON After years of planning, billions of dollars in ads and warnings from scores of lawmakers and consumer groups, the DTV transition could still leave millions of viewers without television on Feb. 18.

Despite repeated inquiries from Congress—and repeated assurances by National Telecommunications and Information Administration officials—the program to subsidize converter boxes ran out of money Jan. 4, putting viewers on waitlists by the hundreds of thousands.

Even if those viewers decided to pay for boxes without the coupons, they may be out of luck, as the NTIA itself projected that demand for the boxes could outpace the supply by 2.5 million.

Chris McLean, executive director of the Consumer Electronics Retailers Coalition, said in early January that stores seemed to have plenty of boxes on hand, but he stopped short of promising enough for the crunch.

"[Retailers] are playing a game of multi-level chess with each other to have enough supply to meet demand and not have a surplus whenever this cycle is over," he said. "And the length of the cycle is not known."

The situation is dire enough that the incoming Obama Administration has floated the idea of delaying the transition date outright. That could be complicated, since new spectrum licensees, as well as the re-assigned DTV channels of the broadcasters themselves, are restricting even those who can participate in the 30-day "nightlight" extension (for DTV education and emergency information only) that will at least explain to viewers why they have no regular programming.

Thousands of "call agents" are expected to staff call centers, like this one in Milwaukee, during the most critical days in mid-February. To handle the expected onslaught of angry, confused viewers, broadcasters, the FCC and the cable industry are planning massive call centers, with staffs in the thousands. But even those would be hard-pressed to answer the 2 million calls—as many as 125,000 an hour on Feb. 18—the FCC figures could come in.

That leaves the prospect of viewers not just without television, but also waiting on hold on government phone lines and doing battle with automated call systems.

The impending PR nightmare has industry groups and lawmakers scrambling and pointing fingers.

Meredith Attwell Baker, NTIA acting administrator, said in early January that no one could have predicted the rising demand for boxes—although there was plenty of skepticism throughout 2008 from lawmakers and consumer groups. She said she only told Congress the program might run out of money in early November, just after the elections.

Sen. Bernie Sanders, I-Vt., who is pushing a bill to subsidize antennas for those left at the bottom of the digital cliff, chalked the situation up to the general incompetence of the Bush Administration.

Consumers Union and the NAB called for emergency measures to get more money in to the coupon program (at press time, the only coupon funding was that recycled from unused, expired coupons).

The FCC is planning to spend millions of dollars on its call centers, anticipating nearly 1.5 million calls on Feb. 18-19 alone.

√√In a letter to Rep. Ed Markey, D-Mass., then the chairman of the House Telecommunications Subcommittee, outgoing FCC Chairman Kevin Martin warned of as many as 125,000 calls per hour, requiring as many as 7,000 workers.

NCTA and NAB spokesmen offered few details on the call centers, saying that the various groups were still working on having a unified approach. NAB said it hoped many callers—at least those facing reception issues—would be routed to local or state call centers.

NAB spokeswoman Shermaze Ingram said the centers would be operated largely by established call center companies and experienced staff, using lessons from the experience of calls generated by broadcasters' simulated shutoffs and educational efforts so far.

"They're not going to be taking people off the streets," she said.

An FCC spokesman offered no details on the call center operation, saying the prospective contracts were pending.

The commission issued its Request for Proposals for the job Dec. 24, with the bids due Jan. 9. Among the details in the 44-page RFP: The FCC estimates that 30 percent of the calls will be from Spanish speakers and 70 percent will end up actually speaking with a human.

The specs require 80 percent of the calls to be answered within five minutes. On Feb. 17-19, the FCC call center will be staffed 24 hours a day. And all facilities and staff will be located in the United States.

Statewide organizations already have a head-start on the customer response, and many local broadcasters believe they are best able to handle the cultural and geographical quirks of their own regions. But local broadcasters are hard-pressed for the cash for some operations.

The Michigan Association of Broadcasters, along with regional chain Don-Lors Electronics, has had 40 incoming lines in a call center since Oct. 1, handling about 1,500 to 2,000 calls per day. Most involve people wanting converter coupons, and the agents have ordered those online for callers, according to MAB President and CEO Karole White. (Most callers—90 percent—are not Internet users, she said.) The next greatest need is help installing the boxes.

In the Michigan case, people who don't reach a human can leave a message, to be returned within 24 hours.

"The people that we call back are just amazed that we actually called them back," she said.

In a very few cases, technicians have visited homes to install boxes. MAB is also working with other groups for outreach, particularly to seniors. White believes local operations can better serve the public and that the FCC and NTIA should have considered more block grants to state groups for such operations.

While the NAB, NCTA and FCC all plan an integrated, nationwide approach, NAB at least recognizes the value of the locals. The video NAB is producing for the nightlight period—which could drive massive call volume—will probably be available in different versions, with either the national hotline or the local numbers shown.

And the calls will come. Despite the massive educational push by various entities, Nielsen in December calculated about 7 million over-the-air households (6.8 percent of all households with TVs) still completely unprepared for the transition.