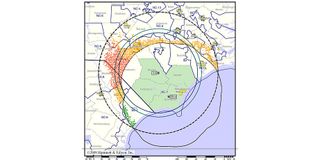 (Note—the headline was modified to reflect updated information on the issue.) WASHINGTON – The Federal Communications Commission has quietly revealed what amounts to its methodology for repacking TV channels in the post-incentive auction spectrum band. The agency released a new version OET-69 software that it intends to use for the repacking, and is seeking input on its efficacy.

Issued by the commission’s Office of Engineering and Technology, OET Bulletin-69 describes the calculations used to forecast the coverage area and interference potential of full-power and Class A low-power TV station transmissions. OET-69 is based on Longley-Rice, an analog-era methodology that yielded short-comings when applied after the DTV transition.

The new version is dubbed “TVStudy.”

“The new software operates on modern computer systems, and it runs much faster, provides greater accuracy in modeling and analysis, and is easier to use and more versatile than the existing software,” the FCC’s Notice stated. “In addition, the TVStudy software will allow us to perform the types of analyses that are needed to support the proposed incentive auction.”

In giving the FCC the authority to hold incentive auctions, Congress directed the agency to “make all reasonable efforts to preserve… the coverage area and population served of each broadcast television licensee” using OET-69.

The commission notes that while OET-69 sets forth several values for predicting signal propagation, including desired-to-undesired ratios, receiver antenna performance, elevation plane transmitter antenna performance and more—it does not provide specifications for developing software to implement the values, which can lead to disparate results. The commission is aiming for consistent results by releasing TVStudy and reference copies of the databases necessary to run it available to the public.

TVStudy was said to be developed in two parts. The first is a Java-based graphical user interference that draws on data from the applicable databases. The second is an analysis engine that does the coverage and interference calculations.

The OET is seeking comments on the software ranging from general observations to identification of bugs. It also is soliciting input on additional capabilities, including methods for identifying populations already subject to interference, so that new interference is not created by the repacking.

With regard to population, the current OET-69 relies on data from the 1990 U.S. Census. The 2010 count, used by TVStudy, indicates a 24 percent increase. The new software also relies on one-arcsecond terrain data versus three-arcsecond, meaning land elevations are reported at every one versus three seconds of latitude and longitude, providing greater accuracy.

As for inaccuracies in the FCC database, the commission seeks feedback on how to detect and correct them. Some examples given were negative beam-tilt values, swapped values for mechanical beam-tilt and orientation, missing maximum values for directional antenna patterns, missing or incorrect directional antenna flags, and effective radiated power values entered in dBk instead of kilowatts.

Updating beam-tilt calculations, TVStudy uses beam-tilt values provided in the commission’s Consolidated Database System, rather than a fixed value as OET-69 did.

OET-69 Vers. 1 also contained an error in calculating depression angles—the vertical value between a DTV transmitting antenna and a given receive site—that caused this value to be calculated based on antenna height above ground, rather than above mean sea level, creating errors in radiated power calculations. The error is corrected in TVStudy, the commission said.

The new software also uses full-precision geographical coordinate data from the U.S. Census, calculated to around 0.0004 seconds of latitude and longitude. The old software rounded to the nearest second, possibly due to “computational limitations,” the commission said.

The new cell-grid approach uses a global rather than a unique calculation applicable to all cells so that interference impact can be predicted at the cell level.

Longley-Rice warnings occur when unrecognized terrain profiles are entered. The Longley-Rice Irregular Terrain Model is based in part on signal path-loss measurements made by the U.S. Commerce Department over several different terrain profiles. The data was used to create generalized terrain models, but those not represented are “flagged” as being “unusable or dubious,” the Notice said.

The old OET-69 software overlooked this in the DTV Table of Allotments used to repack TV stations after the digital transition. Consequently, flagged areas were presumed to have coverage, whether they actually did or not. The Notice said this was found to be “typically not unreasonable,” even though the methodology was modified for the Satellite Home Viewer Act.

The OET wants to know if it should continue assuming coverage in flagged areas or apply some other method.

The new software is available at the commission’s website at http://data.fcc.gov/download/incentive-auctions/OET-69/. Installation and operating instructions are included as separate files, as are links to the necessary correlative databases.

The software was developed on an Apple iMac, but “it is expected that the source code can be compiled on other Unix-like platforms,” the Notice states. “Compatibility of the C source-code with Microsoft Windows-based compilers is not guaranteed, but only minor modification would be expected. The Java code, which was developed in Java version 1.6, is expected to be platform independent. In addition to the source code, a fully-compiled version of the software is supplied for use on Apple computers running OS10.6 or higher. The software also requires certain MySQL client libraries, which can be obtained by installing MySQL Community Server (available at no cost from Oracle). To ensure compatibility, MySQL Community Server version 5.529 is recommended.”

Also see…
June 20, 2011, “Congressman Asks FCC to Explain its Spectrum Analysis Model”
Rep. John Dingell (D-Mich.) wants to know how many people would lose over-the-air TV if broadcasters lose 40 percent of their spectrum. Dingell is calling on the FCC to explain its method for redesignating 120 MHz of broadcast spectrum for broadband.

Nov. 23, 2009, “Digital Coverage is Hot at IEEE Symposium,” by Doug Lung
Shumate's Irregular Terrain with Obstructions Model (ITWOM) includes the use of clutter, rather than diffraction, to calculate losses in the LoS range and on the far side of obstacles. ITWOM does away with the averaging present in ITM, except for Troposcatter paths. LoS and diffraction losses are determined on a point-to-pixel basis, eliminating the "smearing" present in ITM.

Feb. 10, 2009, “Fixing DTV Coverage Problems,” by Doug Lung
In December the FCC released maps comparing stations' analog coverage with their DTV coverage. They also offered some tools for filling in any holes in DTV coverage.

April 14, 2008, “Is it Time to Replace Longley-Rice?” by Doug Lung
The limitations of the Longley–Rice propagation model used in FCC coverage and interference studies have been known for some time.