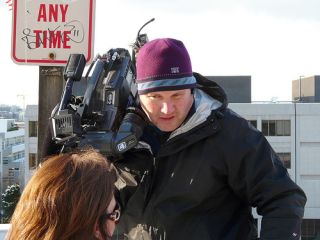 WASHINGTON: Local TV news hours rose 35 percent in seven years, with fewer and fewer reporters doing more work. That was one of the conclusions in a report on the state of local media delivered today to the Federal Communications Commission. The median of full-time news staff members dropped from 32 to 29 from 2006 through 2009, when two-thirds of news directors reported staff cuts.

Steve Waldman, a former journalist who was point man for the “The Information Needs of Communities,” said one-man band technology contributed to the dynamic.

“In some ways, this is a fantastic development,” he said, because reporters are more agile without having to deal with an entire team. On the other hand, reporters are doing less reporting because they’re running the camera, doing the editing, and distributing content on social media platforms.

Early-bird newscasts--those starting at 4:30 a.m. or earlier--proliferated over the last two years. Some stations are doing 24/7 news wheels on digital subchannels. Economics is a primary impetus. Adding a newscast generally is cheaper than filling time with syndicated programming.

“A Midwestern medium-market local TV station can acquire a syndicated show like ‘Oprah’ for half-a-million dollars a year, or ‘The Ellen DeGeneres Show’ or ‘Rachel Ray’ for a third of that cost,” the report said. “But adding a newscast can involve simply shifting resources and adding one show producer.”

The report said it was difficult to determine whether the quality of news had declined because fewer people are doing more work. Despite cutbacks, “the best of the local TV stations are still producing high-quality broadcast journalism of tremendous value to the community,” particularly in times of crisis, it said. Mike Devlin, president and general manager of WFAA-TV in Dallas, Texas was quoted:

“Does the FCC know that WWL-TV [a Belo-owned New Orleans station] stayed on for 16 days straight without a commercial during Hurricane Katrina? Or that KHOU in Houston stayed on for Hurricane Ike down there . . . for 60 hours? When I look at that WWL coverage, there were people that, if they didn’t have WWL, would not have had a connection to the outside world or have known what was going on.”

The downside to doing more with less is that in-depth reporting is on the decline, while the use of press release material is on the rise. Fewer newsrooms are maintaining beat systems whereby reporters specialize on a specific topic, like health, education, business, city hall, etc. The result is a decline in expertise. In some instances, flacks for press releases are being referred to as “beat reporters.” The phenomenon reflects another troubling trend in newsrooms--the increase of pay-for-play stories.

“For many years, local television stations maintained a strict separation--sometimes called the ‘ad-edit wall’ or the ‘church-state wall’---between the sales department and the newsroom, similar to the system at most newspapers. Those in the newsroom were told little or nothing about the deals made between the TV sales department and advertisers, so they would not feel pressured to direct coverage toward anything other than what was in the best interest of viewers,” the report said. “But financial pressures have often broken down the wall.”

Video News Releases, which are basically glorified press releases that appear to be news, are similarly on the rise.

“There is a crisis when . . . more than one-third of our commercial broadcasters offer no news whatsoever to their communities of license,” he said. “America’s news and information resources keep shrinking and hundreds of stories that could inform our citizens go untold and, indeed, undiscovered. Where is the vibrancy when hundreds of newsrooms have been decimated and tens of thousands of reporters are walking the street in search of a job instead of working the beat in search of a story?”

The 478-page report covered newspapers, radio, TV, the Internet and mobile platforms as well as commercial, public, nonprofit and religious content providers; regulations, ownership and copyright issues. It recommended, among other things, that public-inspection files be uploaded on the Internet. It suggested that federal government agencies that advertise, such as the military and public health organizations, buy more local media.

“Each year, the federal government spends roughly $1 billion in advertising without maximizing potential benefits to local media,” the report said.

It called for a formal repeal of the Fairness Doctrine and the elimination of the commission’s localism proceeding, to be replaced by “enhanced disclosure” using an online system where broadcasters would list programming information, including pay-for-play arrangements.

The full report is available at the FCC website.