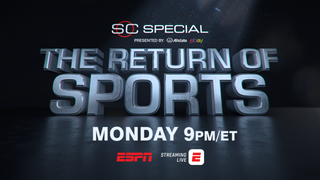 BRISTOL, Conn.—While TV production has been given the greenlight to start again, there is still some uncertainty about when and how one of TV’s biggest draws will return from the coronavirus pandemic—sports. ESPN will focus on that topic during a two-hour special on Monday, June 15, called “SportsCenter Special: The Return of Sports.”

Topics expected to be discussed include broadcast innovations, health and safety of players and workers, the economic impact, social justice reform efforts, plans going forward and the potential long-term impact of COVID-19.

All conversations are going to be pre-recorded in advance of the airtime. Greenberg will host from ESPN studios in Bristol, Conn., while all other guests will participate from remote locations.

“Since sports came to a halt three months ago, we’ve all been eagerly awaiting their return,” said Stephanie Druley, ESPN executive vice president, event and studio production. “In this ‘SportsCenter Special,’ fans will hear directly from commissioners, managers and athletes about the decisions they’ve made and the challenges they’ve faced throughout this unprecedented time, and what the resumption of sports will look like over the coming weeks and months.”

Some sports have already returned, as the PGA Tour and CBS Sports conducted the first full golf tournament and broadcast since the pandemic, and NASCAR has been conducting races since mid May.

“SportsCenter Special: The Return of Sports” will air on ESPN at 9 p.m. ET.