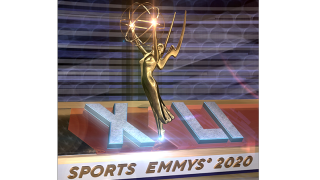 NEW YORK—The winners of the 41st Sports Emmy Awards were announced on Aug. 11 by the National Academy of Television Arts & Sciences through a virtual ceremony. The big winners of the night proved to be ESPN and Fox.

With awards presented in more than 35 categories, ESPN and Fox tied for the most awards by network with seven apiece—ABC also won an Emmy, so the entire ESPN network group came out ahead of all other network groups with eight.

Super Bowl LIV, which aired on Fox this year, was the most awarded program of the year with four (Outstanding Open/Tease, Outstanding Editing - Short Form, Outstanding Post-Produced Audio/Sound and Outstanding Studio or Production Design/Art Direction).

The Masters on CBS (the 2019 tournament) was directly behind the Super Bowl with three Emmys for Outstanding Live Sports Special, Outstanding Technical Team Remote and the George Wensel Technical Achievement Award for its “Every Shot, Every Hole” feature.

Other events that were recognized for their production and technical efforts included the 2019 FIFA Women’s World Cup Final and  HBO’s “24/7: Kelly Slater.”

The ceremony was live streamed, with winners accepting their Emmys virtually from a studio or their home. For the full list of winners, visit theemmys.tv.