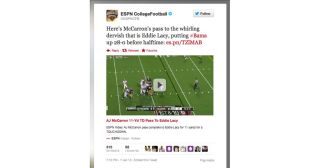 BRISTOL, CONN., and MOUNTAIN VIEW, CALIF. – ESPN and the Pac 12 are taking the venerable instant replay and other video highlights to Twitter. Both have employed the Twitter Video Card, a new software conduit from Ooyala that enables the direct embed of videos into Twitter streams. Previously, Ooyala notes, linking was the only way to include video into Twitter feeds.

“ESPN implemented the platform in December during College Football bowl season as a way to promote their live streams,” an Ooyala spokesman said. “They took highlight cilps and pushed them through Twitter, and with this solution, viewers were able to watch ‘real-time’ highlights directly in the Twitter stream.”

Previously, users were only able to include a link to a video in Twitter. This solution inserts a thumbnail of the video directly into the stream so followers can click and play directly without leaving Twitter. (Here’s an example from the Pac-12 Twitter feed.) Pac-12 has 65,000 Twitter followers. ESPN has an online video audience of about 24 million across all of its franchises.

Ooyala says the video-embedding technology has been certified by Twitter, “meaning customers can quickly and easily integrate and distribute video content directly into their streams across all platforms -- including desktop, mobile web and native smartphone and tablet apps for both iOS and Android.” The videos play within the tweet window.

The technology works via an Ooyala Twitter SDK and automatic hosting for Twitter Cards. Ooyala said this turnkey API “automatically generates the necessary Twitter tags so that a video can be inserted onto a video landing page to enable Twitter Cards.”

The Twitter Video Card is also said to work with Ooyala’s Discovery platform, which recommends content based on previous use. I.e., if user watches a clip in Twitter, they might receive a recommendation to check out related content on the host site. Ooyala says the platform can be used to generate revenue by enabling the distribution of ad-supported content across Twitter streams. The company also offers performance analytics data. It’s being offered at no cost to Ooyala customers.