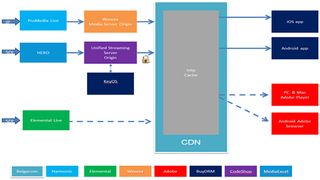 The MPEG-DASH streaming standard passed a critical test at the London Olympics when Belgian public broadcaster VRT demonstrated the technology for a live video stream during the Games. The demonstration featured a live video stream encoded with the MPEG-DASH ISO Base Media File Format Live Profile, delivered through the Content Delivery Network (CDN) run by Belgian Telco Belgacom to a range of device categories including tablets, smartphones, Apple Macs running iOS, as well as Windows and Android-based PCs.

According to the EBU, this was the first large-scale multivendor deployment of MPEG-DASH. It was based on an early version of the DASH-264 interoperability guidelines, specifically developed by the DASH Promoters Group for multivendor deployment of the MPEG-DASH standard. Crucially, DASH-264 supports interoperability with the HbbTV 1.5 hybrid TV specification that will be widely used by European broadcasters for interactive services on connected TVs.

This proof of concept was initiated by the EBU, which strongly backs MPEG-DASH as a key enabler for multiscreen services allowing broadcasters to use a single file and streaming format to deliver content to multiple devices on multiple platforms.

“The EBU strives for open, efficient and interoperable broadcast services and we believe MPEG-DASH is a means to these goals,” said Lieven Vermaele, EBU Director of Technology & Innovation.

The trial has been supported by various DASH Promoters Group members. Encoding was provided by Elemental, Harmonic and Media Excel, with streaming from Wowza and CodeShop, with the latter also providing encryption.

The video is comprised of six different streams that can be chosen by the receiving device player to adjust the video playout automatically to the available bandwidth and display capability. The highest quality supported was 1.5Mb/s, with an audio-only stream available when speed is inadequate for video.

The EBU said that simplicity was the key factor in selecting the Baseline profile for H.264 encoding and 64Kb/s audio bit rate, ensuring that switching between the different streams was executed smoothly. Having demonstrated that the system worked at that profile, there is the potential now for supporting a greater number and range of bit rates in future.

One of the challenges lay in demonstrating secure distribution of premium content sufficient to convince rights holders that MPEG-DASH is ready for prime time services. This meant implementing DRM technology in both the server and the client, requiring cooperation between several equipment suppliers within the trial.

Harmonic’s ProMedia Live system encoded the IP feeds, while the Wowza server, also located on VRT’s premises, acted as an origin server, making the content available for the Wowza cache server in the CDN. This content is then played out by the BuyDRM Android and iOS players.

The trial also needed to demonstrate the Common Encryption standard — a key part of MPEG-DASH with its having already been adopted by the UltraViolet digital locker technology. (That technology is a parallel movement for download to own or rent services as opposed to streaming.) This was done via Microsoft’s Play Ready DRM, through a separate content distribution chain set up in which the Media Excel HERO encoder works with CodeShops’s Unified Streaming server acting as the origin to produce live encrypted content.

For proof of concept purposes, the BuyDRM Android and iOS applications in this distribution chain switched seamlessly between protected and unprotected content.