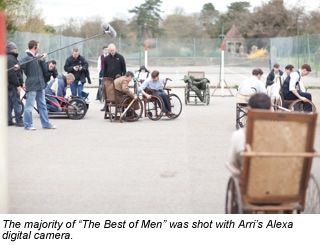 The true story, based on the birth of the Paralympic Games and its visionary creator Dr. Ludwig Guttmann, aired Aug. 16 as part of the channel’s Cultural Olympiad 2012 season.

Written by Lucy Gannon, produced by Harriet Davison and directed by Tim Whitby, “The Best of Men” stars Eddie Marsan (Dr. Guttmann), Rob Brydon (Sergeant Wynne Bowen) and Niamh Cusack (Sister Edwards). The drama tells the story of neurologist Guttmann’s arrival at Stoke Mandeville Hospital and his transformation of the spinal unit using sport as an inspiration for patients.

“The ALEXA was an invaluable investment and one of the smartest decisions that we made,” says Davison. “It enabled us to shoot in the tight time constraints that we had and also allowed us to use the beautiful natural light conditions at Wills Hall and Manor Hall with outstanding results.”

Gray worked closely with Films@59 colorist Tony Osborne, who used Digital Vision’s Nucoda Film Master to conform and grade the piece. “When you’re shooting a period drama digitally, one of the things at the top of your list is to try and take the audience back in time photographically and sometimes that requires taking the edge off the digital element,” says Gray. “We also wanted to get away from the sepia look that traditional period drama has addressing the 1940s time frame in the costumes and the sets, not in the grade.”

“To achieve this, in the test shots we introduced little hints of color to the shadow areas and to the highlights,” explains Osborne. “We didn’t want the slightly desaturated and bleached look that favors the warmer brown color palette and so we created a blue element in the shadows and a flesh tone range that was very natural, with a slightly warm almost creamy look to the highlights.”

“The Nucoda Film Master is impressive. It has a number of different tricks with the high dynamic range toolset to deal with highlights and pulling back highlight detail, which you think may have been lost during filming,” adds Gray.

In the summer of 1948, Guttmann held the first national athletic event for disabled athletes, which took place on the same day as the opening ceremony for the 1948 London Games. As “The Best of Men” documents his legacy to medicine and sport continues to this day.