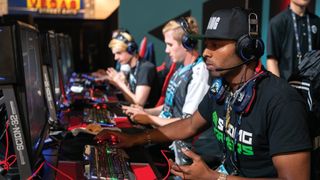 Esports is unique from other sports in that the player/athlete isn't actually on a field. (Image credit: Peter Suciu)

The global market for esports—professional video game competitions—reached more than 450 million viewers globally last year according to data from market research firm NewZoo. As esports continues to attract more young fans—who are picking up a controller instead of a ball—revenues are also on the rise, and are forecast to grow from $1.1 billion last year to $1.8 in 2022, which is why it is being taken seriously as one of the fastest growing sports worldwide.

The past few years have even seen purpose-built esports facilities, including the HyperX Esports Arena in the Luxor Hotel in Las Vegas and the Blizzard Arena on the Burbank Studios lot outside Los Angeles. To ensure that the broadcast competitions can match the level of the NFL or the Olympics in presentation, esports promoters are turning to broadcast production vendors, while also hiring the right talent to pull it all together.

"If I was in charge of an esports production company I'd try to hire two people," said Cameron Reed, business development manager for esports at Ross Video. "One is whoever produces ESPN's ‘GameDay’ and the other is whoever does ‘Dancing with the Stars’ and I'd put them in a room together."

The complexity of esports can't be understated, as each competition brings the challenges equal to that of the Super Bowl as well as its half time show. A major esports competition can be described as equal parts sporting event, rock concert and action movie all in one.

"We're seeing more facilities being built up for these events, but others are repurposing multi-use facilities, and each comes with challenges," added Reed. "But the presentations all are the same, which is why we're seeing production teams that include a combination of old time TV veterans—typically the engineer and technical director—along with kids who really know the games."

LIGHTS, CAMERA, SO MUCH ACTION

Esports is unique from other sports in that the player/athlete isn't actually on a field but is rather static on a stage, while the "action" or gameplay occurs in a virtual/digital realm that is presented on massive monitors for the audience to view. While those players aren't often animated, the in-game action can be, in a word "intense," when  combined with lighting effects that add to the immersion. The result can be sensory overload.

"There are parallels to regular sports, but the rock concert analogy is very good," said Charles Conroy, vice president of gaming for The Switch, a production platform for live esports coverage. "There isn't an actual field, so there are no boundaries."

While this opens the ability to capture the action in unique ways, it also presents challenges. For Super Bowl LIV, Fox Sports deployed 70 manned and robotic cameras, along with 30-plus lock-off and POV units. Esports can often require even more cameras on the stage, the players, the audience and all the virtual cameras that capture the in-game experience.

"This is far more challenging than a regular sporting event," said Chris Merrill, director of product marketing at Grass Valley. "There is the stage lighting and the audience is in shadows so there are no common light levels, while the LEDs have flicker that results in a strobing due to the refresh rate. You need to have the right tools to manage all those levels and do so without a shader that is constantly trying to address it. It is in fact a similar problem to a rock concert."

Given that the most important visuals are what the players see, it would be easy to think that corners could be cut with the cameras in the actual arena but this is far from the case.

"Any lower end pro AV camera will pick up the strobing and there is no easy way to deal with it," added Merrill. "You need consistency as these events are broadcast all over the world. Esports has evolved from being on Twitch and other online gaming channels. It is now on Fox and ESPN and you need to meet their high level of standards."

Many of the facilities for esports weren't designed with such competitions, but more are being built—and can thus address many of these lighting and camera challenges.

"You will see more and more facilities built up over the next year," added Conroy. "Esports are now being taken very seriously by the audience, and this is why the production teams must treat it like any other live event.”

Pulling all the various sources together involves its own magic, and this includes broadcast-quality switchers, comms and KVM tools. While these can too often be afterthoughts for smaller productions, for esports it can be crucial to have the right equipment to pull it together.

"We do think of the switcher as the backbone of the production," said Ross Video's Reed. "A powerful switcher and the right director are critical for the sole reason that—much like news—box effects are the name of the game."

Because it is impossible to cut away from the in-game action, having these effects can allow the viewers to see the player and/or crowd action. "It is like a boxing match," added Reed. "You have to keep the cameras trained on the action at all times—if you cut away from the action and miss that 'knockout' it could be career suicide."

The switcher can also make it easier for a production to utilize graphics presentations that include stats from the game in real time. "The game happens way too fast to have someone manually enter the stats," explained Reed. "You need to have automated triggers and automated data that can be retrieved quickly. I've seen events that are streamed in three languages, and with only one operator, we were able to take in data from the web API, and get the stats sent out to each feed."

While the "field" of play differs from other sports, the technical management of video distribution is basically the same, and this is where the KVM switch needs to handle high-end resolution, full frame rate accuracy and provide latency-free mouse movements.

"Gaming software producers and video editors count on our products to support both real-time and playback requirements," said Dan Holland, marketing manager for KVM provider IHSE USA in Cranbury, NJ. "IHSE is working with companies like EVS to create extenders that can be integrated in the live digital arena requiring frame rates up to 240fps while simultaneously synchronizing secondary outputs at 60fps for traditional broadcast and live-event streaming."

With esports it is all too easy to think about the "video" aspect as these are matches built around video games, but audio is certainly as important and can present even more challenges for these broadcast productions. The audio can include what the audience hears, what the players hear and notably what the production team hears. The result is the loudness of a rock concert and action movie, but with the added challenge of allowing for players to communicate with one another while not hearing the commentary, (which could sway their gameplay).

"The noisy environment is certainly an issue," said Stephen Sandford, senior product manager for intercom provider Clear-Com. "Unlike other sports there needs to be comms for the gamers so they can hear teammates. But this also means high isolation headsets so that the other team doesn't hear this chatter."

There is also the communications between the director and the crew, but at the same time the cameramen can't be totally isolated from the arena noise.

"The cameramen will have high isolation headsets with multiple channels, and with one ear open to the environment," added Sandford. "There is still a little bit of analog feeds, but most of it is digital these days and all of it will go through CAT-5 so there is no interference."

Sandford also noted that intercoms can be the last thing people think about. "The show can't go on without the comms,” he said. “People soon realize the importance of a good set of comms."

For the audience watching at home sound is also crucial, and is an area where corners shouldn't be cut.

"If you put it on Twitch or YouTube that is one thing," said Chris Fichera, vice president of Group One Ltd., the U.S. distributor for audio solutions company Calrec. "If you want this on TV and Dolby is involved, it is a different level entirely. You have to start with a good engineer who understands gaming as well as broadcast. This includes those from live sound and bridges the gap."

PLUS: Esports Projected to Have Banner Year Despite Pandemic

The right equipment and the right person can be crucial to ensuring the audience at home doesn't miss an audio beat.

"The sound coming out of the actual venue is as important as the commentators," added Fichera. "I compare it to a basketball game, which is noisy with the music, the audience and the commentators. The sound from the court and players isn't as loud, so esports takes this up a notch with the game sounds. We've seen audio production evolve quickly, and as the sport grows the audio will be a key component that grows with it."