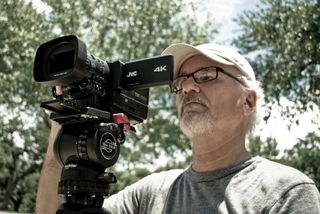 “It was a 260 mile water adventure that had to be completed in less than 100 hours,” Dark said of the Texas Water Safari.

“I felt viewers would be fascinated by the use of cutting edge cameras, no matter what the form factor,” Dark said. “So, I used everything from an iPhone to a GoPro, shooting underwater or with cameras that could fly, literally 14 different cameras.”

When Dark needed camera support, he chose Sachtler’s Cine DSLR and the Video 25 II. “The Cine DSLR supported the JVC 4k camera when I needed to run and gun with the set up,” he explains. “Since the event was always moving down the river, I needed a sturdy tripod that could be moved quickly with minimal set up. The terrain was also uneven in many locations so, the quick leveling release was also really important.

“One of my shooters, Adrianne Parent, used the Cine DSLR with the Canon XL H1s,” he adds. “I wanted Adrianne to follow the canoes going down the river, and I wanted smooth pans. This tripod was perfect for that use.”

When Dark was using the Sony HDCAM, it was also with the Sachtler Video 25 II. “I needed a very sturdy tripod, since this camera was used primarily for long compressed shots,” he explains. “I had a Canon lens on the Sony HDCAM, and I was adding in the lens extender to get the hero shots of the canoes as they approached. The camera had to be on a solid platform.”

Later this year, Dark and McAdams will showcase the documentary at the Macao China Digital Cinema Festival and also enter it in the Ojai Film Festival in California, in addition to other U.S. festivals.

Dark also plans to use the documentary as a teaching tool. “In the back of my mind, I knew the diversity of equipment would be a great teaching tool for students and young filmmakers,” he said.

Previews of the project can be seen on Youtube.