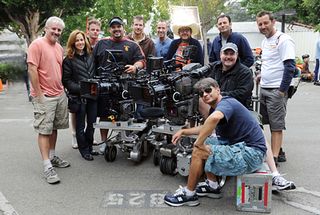 Oconnor, a Vitec Group brand, has announced that their 2527 camera head has been selected by cinematographer Andrew Rawson for use in the production of the ABC series “Cougar Town.”

The series is shot both on location and sound stage, with Panavision’s Genesis system camera technology being used.

“That’s a lot of work for the cameras, and we need support that will be there for us all the time and not break down,” said Rawson. “That’s Oconnor. Whether we are doing extreme tilts from ground level at our elevated boat set, or going underslung with low mode plates, the Oconnor 2575 allows us to quickly adapt and execute the needs of any shots thrown at us.”

Rawson has worked with the creator of “Cougar Town,” Bill Lawrence for the last decade, starting as a gaffer on “Scrubs” and moving up to the position of DP. He remarked that for eight of the 10 years he was involved with the show, Oconnor heads were used.

“Actually, I have always used them,” said Rawson. “I would never be caught on a set without an OConnor 2575.”