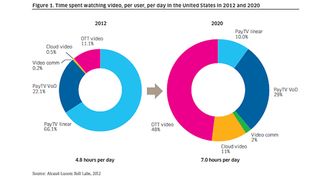 New research from Bell Labs, the research arm of Alcatel-Lucent, indicates that increased consumption of video content will push the limits of wired broadband networks over the next decade.

Presented in “Video Shakes Up The IP Edge,” the new research estimates that by 2020, U.S. consumers alone will access seven hours of video each day, compared to 4.8 hours today, and will consume the added content on their tablets at home and on the go.

The research forecasts a dramatic shift in the viewing habits of consumers as they move from broadcast content to video-on-demand services. VOD services will account for 70 percent of daily content consumption compared to 33 percent today.

Cloud services, news sites, social networking applications, increasingly will become video based, which will drive the amount of Internet video content to grow 12X,that is from 90 Exabytes to 1.1 Zettabyes, the research said.

The shift to the unicast model of content delivery will place disproportionate pressure on the IP edge of the networks, the part of the network where most of the intelligence is needed to deliver video and high-speed Internet service.

“Left unmanaged, the rapid growth in video traffic can turn into a deluge and spell disaster,” said Alcatel-Lucent CTO Marcus Weldon. “It is important to look at where service providers' investments can have the most impact, and this research makes clear that the IP edge of both wireline and wireless networks, which are increasingly becoming one and the same, offers the greatest opportunity to improve network performance.”

Bell Labs found that on-demand video services, such as HDTV premium movie services as well as video sharing sites, will become even more popular over the next five years. As a result, on-demand video will command an increased share of viewing hours, causing peak-hour traffic at the edge of new IP-based networks to grow 2.5X faster than the amount of traffic on the broadband connections reaching households.