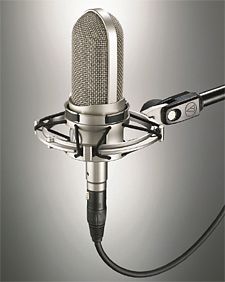 The Audio-Technica AT 4080 ribbon microphone
Ribbon microphones have been in use since the 1930s. RCA mics such as the 44B and 77DX are now considered vintage and command high prices. The trick is finding one that's in good shape, as the original ribbons are relatively delicate. This is not really due to age. It's just the way they were originally designed. Or, you can try a new Audio-Technica AT4080 bi-directional (figure-eight), dual ribbon microphone that is brand new and may be a bit more affordable. It was seven years in the making, and boasts a 150 dB SPL level and the sensitivity of a studio condenser.

Why bother with a ribbon?

The ribbon in a ribbon mic has to have unique properties to produce good sound and it must be durable. Audio-Technica's ribbon material is, "pure aluminum from a famous plating company."

That's all AT would say.

The other "magic" in a ribbon mic is the way the ribbon is crimped. This is the process in which the ribbon is shaped and imprinted with a textured pattern, to allow it to hold its shape over time.

Audio-Technica has a patent-pending MicroLinear ribbon imprint, which they believe results in a more durable ribbon with better resistance to lateral flexing. The AT 4080 comes with a five-year warranty on both the mic and the ribbon. This is not something you'd find with a vintage mic. Plosive protection, always an issue with ribbons, is achieved with an ultrafine metallic mesh placed over the ribbon so as to be as acoustically invisible as possible.

Early ribbon mics, even the higher sensitivity RCA 77DX, didn't produce a lot of output and required a lot of preamp gain. Audio-Technica has solved that problem by using stronger magnets, longer dual ribbons and a small low-noise amplifier on-board the mic. What this works out to, for practical purposes, is that the AT 4080 is about 20 dB more sensitive than an Electro-Voice RE27N/D. In fact it's about 2 dB more sensitive than an AKG C414 B-ULS condenser mic in a figure-eight pattern. So forget anything you may have heard about ribbon mics not having enough sensitivity. The on-board amp uses phantom power, so, if you're old school enough to have learned not to run phantom power on ribbon mics, you'll have to change your ways in this respect too.

The Audio Technica AT 4080 has a published frequency response of 20 Hz to 18 kHz. Like most ribbon mics, it doesn't have a presence peak, so it doesn't sound as bright as a condenser mic. With few exceptions, e.g. the beyerdynamic M500, ribbon mics don't have a lot going on above 10 kHz. The AT4080 is down about -3 dB between 5 kHz and 10 kHz, but pops back up to 0 dB by 13 kHz before slowly fading away. The capsule, frequently called "the motor" in a ribbon mic, is well isolated from the body.

After recording a voice track, I added a high-pass filter at 30 Hz with an 18 dB per octave slope and a parametric EQ set fairly wide at 125 Hz and pulled down 6 dB. With that adjustment, the AT 4080 flattened out nicely. With a little more EQ adjustment, I was able to make the top end shine a bit—at least as much as a good dynamic mic. I think that in addition to working well on my baritone narrator voice, the AT 4080 would also smooth out edgy, unpleasant voices. The 150 SPL rating also makes it a good choice for the loudest screaming voices that I can imagine.

Do you want one in your TV studio?

That depends on what you want to record or broadcast and the acoustics of your space. Like most ribbon mics, the AT4080 has a bi-directional figure-eight response pattern. It picks up sound from the front and back (zero and 180 degrees), but very little at 90 degrees off axis. If you have two people in the same room and need to mic them both, theoretically, you could put them on the front and back sides of this mic and record both voices with one mic. They would have to have equally loud voices and be the same distance from the mic and close enough so as not to hear much of the room itself. If the two people had unequally loud voices, you could position the quieter voice closer, but now we're entering that area of recording where things get iffy. If one voice required EQ and the other one didn't, you're stuck.

If you have a small booth with a large plate glass window behind the mic, although the figure-eight side nulls are quite deep and effective, the backside response will pick up the bounce from the window, or any other hard and reflective surface. If you turn the mic 90 degrees so that one of the nulls is aimed at the reflective surface, you'll reduce the "roominess," assuming that the back is not aimed at another hard surface.

If your facility uses a lot of compression and limiting to increase relative loudness, you may be aware these dynamics processors generate gritty distortion artifacts, especially when using relatively brighter condenser microphones with more aggressive presence peaks. The harder you hit the processing, the nastier it sounds. The Audio-Technica AT 4080 should keep the sound from getting edgy as quickly in such environments.

If you record or broadcast music, a ribbon mic comes in very handy. It's directionality is a very useful tool on a music sound stage—almost like a free isolation booth. With a little practice, you can capture one instrument nicely and position the mic to put another instrument in one of the mic's two nulls to avoid picking up the unwanted instrument. Ribbon mics are frequent choices for horns, strings, banjos, accordions and edgy electric guitar amps, as their softer high frequency response takes the edge off of those instruments. They can also do well as drum overheads if the space has been designed properly.

With two AT 4080 ribbon mics, you can experiment with Blumlein pair recording. Noted electronics engineer Alan Blumlein applied for a U.K. patent in 1931, describing the use of two figure-eight mics positioned coincidentally on the vertical axis (one directly over the other) and with each mic's lobes positioned in the nulls of the other mic. The result, as viewed from above, is a stereo cloverleaf instead of a mono figure-eight pattern. Sound sources are usually placed at or in between the front lobes. Experimentation with four or more sources in a circle surrounding the Blumlein pair—in a proper acoustical environment—has produced some exceptional recordings, with some of these yielding a "surround sound" of sorts.

If you have a studio big enough so the sound doesn't bounce around much, and have multiple cameras arranged for shooting musicians in a circle, you may be able to record them all with only two mics. The musicians will need to balance the loudness of their own instruments, but playing in a circle allows for optimum musician eye contact which normally translates into better performances.

When a company like Audio-Technica spends seven years developing a mic to get it right, you can expect good performance for your investment. While you can use the AT 4080 for voice-over work after a little EQ, and in a properly designed booth, it can also be used for a variety of other applications as described above. It's a worthy addition to your mic locker because it's sturdier, more sensitive and has more high frequency response than those vintage ribbon mics.

Ty Ford is on special assignment to TV Technology. Look for his other writing at Pro Audio Review, Radio World, or atwww.tyford.com.