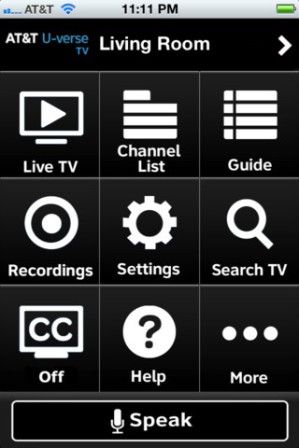 DALLAS--AT&T has launched the U-verse Easy Remote App that allows U-verse subscribers to use voice remote control capabilities via their iPhone or iPad. The app is available for free at iTunes.

AT&T says the app makes it easier for U-verse TV customers with disabilities such as vision and hearing loss, to control their TV. The app was built with a commitment to universal design and is optimized to give all users access to features to control their TV, including:

A voice-initiated remote control to perform a variety of commands, including Channel Up, Channel Down, Fast Forward, Rewind, Replay, Pause, Play, Record and Go to channel (name or number);

A voice command feature that lets subscribers choose a show they want to watch by simply saying the show title or channel number into their device.

iPhone's VoiceOver screen reader, which enables subscribers to hear TV show and channel information as they scroll through the programming guide.

"Most Americans rely on their television as a critical source of news and entertainment and it is important that these resources be made accessible for all users," said Larry Goldberg, director of WGBH's Carl and Ruth Shapiro Family National Center for Accessible Media (NCAM). "It is great to see an app like Easy Remote apply many of the universal design features that improve access for customers both with and without disabilities."

The U-verse Easy Remote App was initially developed by researchers at AT&T Labs. The voice control functions of the Easy Remote app are powered by the AT&T Watson speech recognition technology using AT&T's Speech API, which uses advanced natural language processing to recognize and understand spoken words. Also developed in AT&T Labs, AT&T Watson speech recognition technology has been powering advanced speech services in the marketplace for many years and is now available for third-party developers to use in their own apps