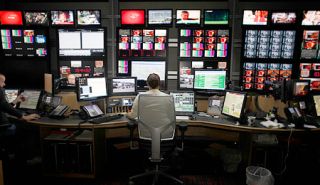 “AP’s operational requirements called for a monitor-scape occupying almost the entire front wall,” states ATG Broadcast’s Managing Director Graham Day. “Custom Consoles’ Media Wall support system formed an ideal basis for the design and construction of a structure that combined rigidity with the flexibility to add or remove individual displays over the course of the MCR’s operational lifespan.

“In line with modern broadcast monitor-wall design, the monitor-scape consists of multiple flat-panel LCD screens which are electronically subdivided into virtual monitor stacks allowing a large number of incoming or outgoing video channels to be viewed in parallel. Additional screens located in a horizontal row along the top of the Media Wall can be assigned as required.

“A four-position Module-R desk is located in front of the monitor-scape, each position accommodating control and system-monitoring equipment. An additional Module-R desk is located near the centre of the MCR for use by the shift supervisor and, when required, an additional member of the operating team. As with Media Wall, the inherent modularity of Custom Consoles’ Module-R enabled us to taylor the desks to fit AP’s precise requirements without the cost of traditional bespoke furniture.”

Custom Consoles’ Media Wall is designed to accommodate large or small arrays of flat-panel monitors and ancillary equipment. Media Wall incorporates height-adjustable horizontal beams suspended between 2 meter high silver-anodized aluminum columns. Beams are available in 1,500, 2,000 and 2,500 millimeter widths and allow easy attachment of large and small panels using pivoting VESA and plasma-mount fittings. Horizontal cable trunking is provided at the rear of each beam and vertical trunking at the rear of each column, enabling easy and expandable housing of power and video wiring. Equipment pods with 19 inch racking behind removable vented panels can be accommodated at floor-level.