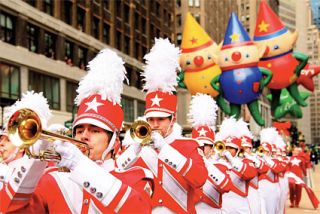 With a 2.5 mile parade route to be covered live by NBC-TV, "the Macy's Parade is one of the biggest live daytime TV events of the year," says Brad Lachman, NBC's executive producer for the broadcast. NBC Research estimated that 43.7 million people tuned into its national parade broadcast in 2010.

"Gathering to watch the parade, whether in person or on television, has become a tradition for families across the nation and synonymous with the start of the holiday season," says Amy Kule, executive producer of Macy's Thanksgiving Day Parade. "We are truly humbled by the unique role the Macy's parade now fills in the lives of Americans."

For the past 18 years, Lachman has helmed NBC's Macy's parade broadcast. (His company Brad Lachman Productions works with Macy's to produce the show for NBC.) To do the job, Lachman employs a crew of 200 on the parade route alone; backed by many more staff at 30 Rock. Moreover, NBC's parade unit starts planning the broadcast three months before it happens—and does 'round-the-clock rehearsals and technical run-throughs just before the parade occurs.

Every Macy’s Thanksgiving Day Parade ends with an appearance from Santa Claus, signaling the start of the holiday shopping season. The parade has been a New York Thanksgiving tradition since 1924 and with the exception of World War II, has run annually since that date. In 1946, the Macy parade's current route was set, starting at 77th Street and Central Park West, winding its way south at the Macy's store in Herald Square at 34th Street and 7th Avenue. The route change was made for the parade's first TV broadcast. It was shown on local TV that year, and then went national in 1947.

NBC's coverage of the parade route relies on numerous locations. "We begin at the starting point with about five cameras, with live commentary by Today's Al Roker," says Lachman. "That's for hour one. Then, as Al gets driven down to our downtown booth to join up with hosts Matt Lauer and Ann Curry for hours two and three, we broadcast live on-street performances from current Broadway shows such as "Sister Act" and "Spiderman." We then pick up the parade downtown, concluding with Santa's arrival at Herald Square."

NBC's parade production is anchored in a mobile unit leased from All Mobile Video (AMV). Using miles of fiber-optic cables strung throughout Manhattan, the truck is connected to fixed and mobile cameras along the 2.5 mile parade route.

"We have 22 HDTV cameras in all," Lachman said. "This includes a Steadicam and a helicopter-mounted camera that provide us with live feeds via microwave." Audio is picked up by microphones co-located with these cameras, and mixed back at the AMV truck.

The live-switched coverage is fed by fiber back to 30 Rockefeller Plaza. From here, NBC's New York headquarters provides parade video to the world by satellite and landline networks.

As impressive as NBC's Macy's parade broadcast is—a lot can go wrong when during a live telecast. But the show must always go on and the behind-the-scenes prep is even more mind-boggling.

This year’s Macy’s Thanksgiving Day Parade will feature 15 giant character balloons; 44 novelty/ornament balloons, balloonicles and balloonheads; 27 floats; 1,600 cheerleaders, dancers and performance group members; 800 clowns; 11 marching bands; and a host of celebrity performers. "On Monday night before the parade, we close off 34th Street in front of Macy's and do live run-throughs of the Broadway show numbers," says Lachman. "This goes until 11 p.m. The next day, Tuesday, we do the run-throughs again from 8-11 p.m." While all this is occurring, NBC's technical crews are working on camera positions and network connections; checking every piece of equipment and every signal path.

On Wednesday, the network runs full technical rehearsals to ensure that everything is proceeding as planned. "We break at 5 p.m. and then return at midnight," Lachman says. "At 3 a.m., we bring in the marching bands. We run through each of their performances on-camera until 5 a.m."

By then, the NBC crew sends out golf carts carrying signs to indicate which floats they are standing in for. This allows the camerapeople and switchers to get familiar with the parade order.

At 7 a.m., it's time to dress rehearse the four planned Broadway acts, in full costume. This runs until 8:30, at which point it is time for a last-minute rundown of the parade's opening segment. "By 8:45 we're done, and we take a 15 minute break," Lachman says. "When 9 a.m. ET hits, it's showtime."

Even with 18 parades under his belt, Lachman is eager to do this year's broadcast. "This is a labor of love that we all believe in, and that we are all very proud of," he explains. "Besides, in the 18 years that I've done this broadcast with my team, we have never run overtime. That's a record I want to keep!"