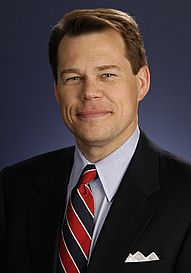 David RehrWASHINGTON
In anticipation of this year's NAB Show, TV Technology talked with David Rehr, president and CEO of NAB, about the opportunities that will be available for those attending the annual confab next month.

TV TECHNOLOGY: Economic pressures being what they are, why should someone attend the NAB Show this year?

REHR: NAB is producing a first-rate convention. Despite the troubled economy, the show remains the largest gathering of electronic media professionals in the world. We've populated our exhibit hall with over 1500 companies and our featured speakers include some of the biggest names in the industry.

Indeed, no other event offers as much opportunity for attendees to gain competitive insight, network and expand their knowledge on the trends, technology and content that are shaping the industry's future.

In reality, it is precisely in times like these that attending the NAB Show offers the most value. It is an investment rather than an expense, especially when you consider that what attendees take away from the show can ultimately improve their businesses' bottom line by uncovering new revenue streams and money-saving strategies. Attending is something positive and proactive people can do in the face of a challenging environment. Those who stay plugged in stand to be that much further ahead when the economy turns around.

I should also mention, with hotel rates down about 50 percent and costs down on all services in Las Vegas, it's more affordable than ever to attend the NAB Show.

TV TECHNOLOGY: There's been a lot of press about the pressure that broadcasters are under to reduce expenses and send fewer people to the show. Do you anticipate a drop off in broadcast attendance?

REHR: It's too early to tell how the final NAB Show attendance numbers will shake out. Our show is somewhat inoculated from economic downturns due to the size, scale and international flavor of our event. For example, the NAB Show is truly a global media marketplace—with nearly 30,000 of our attendees coming from overseas. You might not be aware of this, but broadcasters make up only about 20 percent of the total attendee audience. NAB Show attendees run the gamut from the production/post production community—which makes up about 30 percent of our attendees—to a significant satellite and Internet component, and to cable TV and government video employees.

Having said all that, we're cognizant of the world economic recession and the drop in CES attendance earlier this year. So it would not be a huge surprise if our attendance is down somewhat from last year. All we can do is put on a great show, and that's what we plan to do.

We're also pleased that the quality of the attendee base will again be strong this year. For example, all of the affiliate boards of directors from ABC, CBS, Fox and NBC will be attending the NAB Show, as will the entire Fox affiliate body. These are the general managers from the most influential TV stations in the U.S., and they're the people with the power to make business and buying decisions on the show floor.

TV TECHNOLOGY: What are the exhibitors telling you about their prospects for the show?

REHR: As always, the NAB Show will be a launch pad for new technology and content, just as it has for nearly a century. We are welcoming over 100 first-time exhibitors this year including Electronic Arts, Philips 3D Solutions, Metro-Goldwyn-Mayer Inc. and 3ality Digital as well as major exhibitors from years past including Avid.