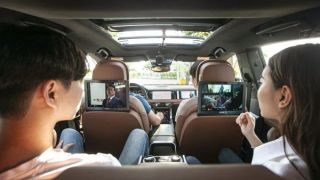 HUNT VALLEY, Md.—Datacasting is nothing new to TV broadcasters, but what is are multiple opportunities to earn additional revenue by offering ATSC 3.0-based datacasting services and the sizable effort going into making them a reality.

For more than 90 minutes on Aug. 18, various players in the process offered their insights during the “AT$C Webinar 4: Monetizing ATSC 3.0 Datacasting” webinar produced by One Media 3.0 and the Sinclair Broadcast Group.

The panelists, Kevin Gage, COO Cast.era, a joint venture of SK Telecom and Sinclair; Peter Guglielmino, CTO, Media & Entertainment, at IBM; Sasha Javid, COO of BitPath (formerly Spectrum Co); and Mark O’Brien, president and CEO of Spectrarep, discussed a broad range of related topics, including progress on a nationwide rollout of ATSC 3.0, various new datatcasting business plays, synergy between ATSC 3.0 and 5G networks, why ATSC 3.0 is a financially attractive alternative to 5G for certain data applications and how ATSC 3.0 might be the new Wi-Fi in terms of acceptance by wireless carriers. The webinar was moderated by Michael Bouchard, vice president, Technology Strategy, at One Media.

SHOW ME THE MONEY

Bouchard set the tone for the webcast up front, describing the fundamental difference between the existing ATSC 1.0 DTV standard and NextGen TV. “ATSC 3.0 turns broadcast spectrum into a big data pipe where linear video is only one form of the data,” said Bouchard.

Allocating a portion of a 3.0 channel to data transmission will enable broadcasters to create an IP packet umbrella over each of their markets, delivering the data of new customers who need to reach remote devices with their IP packets.

ATSC 3.0 is the tool stations can use to offer “wireless broadcast service”—a term that seems redundant on its face but played heavily in the webinar to emphasize that broadcasters will be delivering IP packets over the air like other familiar wireless networks.

PLUS: Bringing Profits to NextGen TV

Reaching IoT (Internet of Things) devices and smart city sensors with data is an obvious application. While many people think about these devices being used in monitoring applications where a backchannel is mandatory, many other IoT applications where there is a “data asymmetry” are well suited to 3.0 datacasting, said Javid.

“Whether those are software updates, some kind of command to take an action, these kinds of downlink information flows are needed to be timely to thousands if not millions of devices, and in some case there might even be an inherent backchannel,” he said, adding that utilities, for example, have a built-in backchannel “from the grid itself.”

Another application is enhanced geolocation services for a variety of smart devices, ranging from agricultural sensors and drones to driverless vehicles. A 3.0-based geolocation service will be particularly valuable because it can deliver data down to the centimeter, not meters. “That’s incredibly important, especially when you start having autonomous automobiles and drone services ...,” said Gage.

A GPS backup is another 3.0-related datacasting application. The U.S. military has expressed concern about the lack of GPS redundancy and what might be required to shore up the current system, said O’Brien.

“Launching satellites is incredibly expense,” he said. “So, if we can deliver maybe not the exact same service but some level of redundancy to the current GPS system, that is readily monetizable ….”

Spectrarep specializes in offering public broadcasters datacasting solutions using ATSC 1.0, and is looking to leverage the mobile reception and enhanced indoor penetration capabilities of 3.0 to offer a higher level of service for first responders on the move, such as firefighters on their way to a blaze, and households in the general public without broadband service that are struggling to educate children at home during the COVID-19 pandemic, said O’Brien.

The company is currently deploying thousands of 1.0 datacasting receivers for education and is “about to hit the turning point where we have to [put 3.0 receivers in those devices],” he said, noting once that happens Spectrarep will be seeding the market.

While the early days of 3.0 datacasting may see broadcasters competing with wireless carriers for business, the panel agreed that eventually the two will be seen as complementary, much in the same way as Wi-Fi networks came to be valued by wireless carriers.

“This has been proven already in the world between cellular and Wi-Fi,” said IBM’s Guglielmino. “There are two separate networks. People could say they compete, but if I am a cable company with a whole myriad set of Wi-Fi hotspots, it helps the end user get access to content when I don’t have access to a cellular signal.”

However, while synergy exists between 3.0 and 5G networks, there will be “a little bit of competition,” and broadcasters must have “a compelling value proposition” that stands up against what the carriers offer, said Javid.

“That’s exactly the use case of Wi-Fi. They did exactly that,” he said. “Wi-Fi wasn’t in the phone to begin with, but they created a compelling value proposition from the beginning. Eventually the carriers realized it was here to stay and that there were some benefits.”

Gage recounted a demonstration of this 3.0-5G network synergy in 2019 on Jeju Island off the southern tip of the peninsula. A Maserati SUV was equipped with both ATSC 3.0 and 5G wireless receivers for the demo.

During the test, a 3.0 data signal was used to provide navigation waymarks that were combined with GPS location data delivered via the 5G network, he added.

If wireless carriers are in the business of selling voice and data plans to consumers, why should they want to cooperate with broadcasters, offloading unicast traffic from their networks to a 3.0 datacasting network, asked Bouchard.

The answer comes down to reducing expenses and better resource utilization of the telco’s core networks, said Guglielmino.

This is a major problem for telcos because they earn no money from delivering over-the-top video streams. “They’re not monetizing it; they are subsidizing it,” he said, noting that the costs “go up exponentially” when higher frequency waveforms are involved as with 5G because more antennas and amplifiers are needed.

While his example focused on video, Guglielmino pointed out that it is just as true for any data delivered and suggested how a 3.0-5G synergistic network could work. “If I’m [a telco] delivering 10 million updates to Toyotas, it’s probably going to be a lot less expensive for me to partner with a broadcaster to do it and … be the back channel because that’s what broadcast needs,” he explained.

Before broadcasters can cash in on these sorts of datacasting opportunities, they will first have to deploy ATSC 3.0, and that’s the focus of BitPath, a joint venture of Nexstar Media Group and Sinclair.

“What we are really trying to do is aggregate spectrum capacity across member television stations,” said Javid. “In order to compete against carriers, you are really going to need a nationwide network, and in the long term, that’s the only way to make a compelling play.”

At the beginning of 2020, the Advanced Television Systems Committee was trumpeting that more than 60 stations covering 70% of the population would be on air by the end of the year. However, COVID-19 has made that goal unworkable, said Javid.

“By the end of the year, we think another six to 10 markets [in addition to the 11 markets on air now with 3.0] are very doable this year despite the fact that we’ve had to deal with a lot of the COVID-19 challenges and restrictions on travel,” he said.

“But the good news is that the deployments are happening. Each time we do a market, we get a little bit faster, a little bit better, at it,” he said.

Transmitting 3.0 is only half the story, however. The other key component to deploying a nationwide wireless broadcast network is the network core. “Developing the core is fundamental to anything we are going to do,” said Javid.

Guglielmino concurred. “[T]he core network to me is essentially a platform that’s similar to what the telcos have to have. They have to have ways to onboard services, provision services, activate services and bill the services,” he said.

IBM is investigating how to leverage open-source innovations, open source code and open source platforms in creating a 3.0 network core. “When you have these platforms established, then you can do things like add AI and ML [artificial intelligence and machine learning] to understand how to optimize the delivery,” he said.

Cast.era is leveraging the experience SK Telecom has garnered developing third-, fourth- and fifth-generation core networks as it tackles the 3.0 core for a hybrid 3.0-5G network, said Gage.

“Everything they have learned from orchestrating and slicing spectrum and moving data around and efficiencies and flexibility that you have so you get to a world where it is a low- or no-touch environment because of the sheer volume [of data] that’s circulating,” said Gage.

The webinar, the fourth in the series, concluded with questions from those in attendance.

The next webinar in the series, “Enabling the Broadcast Internet,” is scheduled for Sept. 1. Registration is available online.