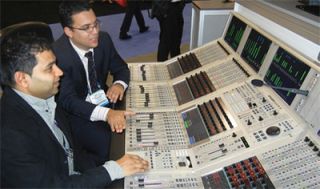 Despite a wide range of new audio product introductions, there seemed to be just one word on everyone's lips—loudness. But there were plenty of other products at the NAB Show too. Networking and distribution platforms based on MADI, audio over IP, and other transports continue to grow, with manufacturers offering systems that variously combine I/O, mixing, processing, routing, communications and other functionalities.

DiGiCo launched the SD7B, a broadcast version of its popular live sound desk, which handles well over 1,000 inputs and features 128 busses, comprehensive processing, Stealth effects, and supports up to 5.1 panning and multi-operator use. The SD10B mixing console allows stereo, LCR, 5.1, or up to 11 mono channels to be “folded” under a single fader strip.

Harris introduced the PR&E RMXengine, which automatically generates mix-minus signals for every fader on the RMXdigital console and also enables advanced dual-console operation.

Sound Devices launched its MixPre-D two-channel USB audio interface, which accommodates the increasing variety of cameras and devices currently in use.

Studer's Vista 5 console may be optionally upgraded to the M2 version with the addition of precision TFT metering system. Studer's Vista 9 now supplements its Vistonics interface with TFT-based metering, FaderGlow and numerous other features.

The new R-1000 48-track recorder/player from Roland Systems Group can be used standalone or integrated into a V-Mixing System via Cat5e/6 cable.

Zaxcom's Nomad, designed for location sound, can record up to 12 tracks from its18 analog inputs onto dual CF cards in the company's Mobile Audio Recording Format (MAFI), or FAT32.

The new PR&E VMReact from Harris is a logic processing device that enhances VistaMax networked audio systems with automated responses to changes in audio routes, logical conditions and other events.

Sennheiser introduced the MKH 8060 short shotgun and the MKH 8070 long shotgun. Both condensers can operate as AES42 digital mics with the addition of the MZD 8000 module.

Audio-Technica has extended the abilities of the SpectraPulse Ultra Wideband (UWB) wireless microphone system with the new mtu301 body-pack transmitter.

Sennheiser introduced key features of its Wireless System Manager (WSM) software that allows the evolution Wireless ew 300 G3, ew 500 G3 and 2000 Series to be networked and programmed without a computer.

TSL's PAM2i-C offers external screen monitoring capability and IT-network integration. The PAM1-3G16 adds many of the advanced features of the multi-award-winning PAM2-3G16 in a 1RU multichannel audio monitoring unit with a 16-bargraph display.

DK-Technologies unveiled two versions of its new low-cost DK Meter: the stereo DK1 and 5.1 DK2. No bigger than an iPhone, it supports all known loudness measurement recommendations.

Fraunhofer's Metadata Transcoder converts ATSC A/52 metadata into the AAC format in real time from AC-3 sources and is now offered in the company's codecs.

Pro-Codec, a plug-in collaboration between Fraunhofer IIS and Sonnox, supports mastering to multiple codecs (AAC, HE-AAC, mp3, HD-AAC, mp3HD, plus surround options) and real-time me-tering and monitoring of the output.