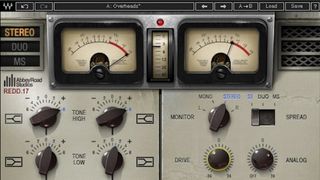 Loudness monitoring (see: the CALM Act) and surround sound mixing may occupy more attention, but the evolution of digital console technology, once ferocious in pace, continues to advance. Purists may not be pleased, but plug-ins that replicate the tonal characteristics of classic analog technology are increasingly garnering high marks with the audio engineering community.

Waves Audio recently announced the release of two plug-ins, REDD.17 and REDD.37-51, developed in conjunction with Abbey Road Studios. Best known as the recording home of The Beatles, Abbey Road was famous for building much of its own equipment. Its in-house design team, Record Engineering Development Department (REDD) turned out boards that were renowned for their warmth and color.

Mirek Stiles, Head of Audio Products at Abbey Road Studios, has been working at the fabled recording studio for the last 13 years. “Ever since I first heard the word REDD at Abbey Road Studios, these consoles have had a legendary, almost mythical aura around them. Most of the original REDD consoles have been lost over time, but by using the few examples that are left over and studying the original schematics and design notes from the archives, I believe Waves and Abbey Road have revived an important part of musical history.”