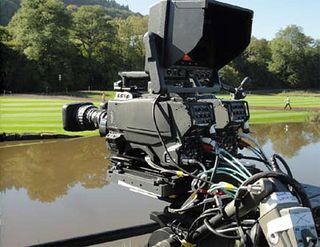 Two Toshiba IK-HD1 HD cameras on a Polecam 3D Head at the Ryder Cup first tee.
Rain, rain, and still more rain – that is what BSkyB faced during its October 1-4 2010 3DTV coverage of the Ryder Cup team golf classic at Celtic Manor.

The event trumpeted all things technological – it was the first major live sports event on BSkyB’s new 3D channel; as well as being the largest 3D sports broadcast to date this year – despite the rain! “We had to keep clearing the lenses of condensation,” says Mark Grinyer, 3D Sports Solutions Business Head with Sony Professional Europe. “It even caused fogging in the fibre optic cables!”

Despite the damp conditions the combined BSkyB/Sony/Telegenic OB unit succeeded in bringing all the 3D Ryder action to European television screens. As UK 3DTV goes, Sony Professional Europe is a seasoned veteran. The manufactuer has already outfitted two 3DTV OB vans for Telegenic – units T-18 and T-19 – which have already been deployed by BSkyB in covering football and other events.

“When the Ryder Cup came along, BSkyB asked us if we had new technology that might be useful,” Grinyer says. “And we did in the form of our new HDFA-200 optical fibre transmission adaptors. These units work at 3Gbps – 3 gig, in other words – they are capable of combining and then transmitting the dual feeds from a pair of 3D HDTV cameras down a single fibre line.

Chris Taber using a 3DTV ‘Polecam’ supplied by Pedestal Television on the first tee. “From an operational stand point, this is tremendous. It brings 3DTV down to the simplicity that we are serving as the 3D eyes of the broadcast. They were mounted on 12 3ality and Element Technica side-by-side 3DTV camera rigs.

As well, four specially built wireless 3DTV Steadicam units were provided by Presteige Charter. Labelled as the PC-RT1000, this custom unit uses a pair of side-byside Sony F11 sensors with a 5-50mm zoom range inside a single body about the size of an HDC-1500. The PC-RT1000 also has a CCU and a remote control panel that can control all camera functions from a distance.

Finally, the BSkyB/Sony/Telegenic crew used a 3DTV ‘Polecam’ supplied by Pedestal Television on the first tee. The Polecam consists of two Toshiba IK-HD1 cameras on a side-by-side mounting plate. It required a 2km fibre optic run to connect back to the production trucks. The Polecam was operated by Chris Taber, who describes the shoot as being “wet, windy, and enormous fun!”

Such was the scale of BSkyB’s Ryder Cup 3D coverage, that one OB van wasn’t enough: They needed two. Telegenic’s T-19 OB van was “purely focused on producing the best quality 3D video possible that could be done in the rain, which meant stereography and picture convergence,” Grinyer says. “T-18 handled everything else.” As a result, the BSkyB/Sony/Telegenic OB area looked like a parking lot, due to all the vehicles parked together. In a bid to keep out the rain, tenting was assembled between the trucks.

The rain that dogged the 2010 Ryder’s Cup made life difficult for the BSkyB/Sony/Telegenic production crew. Since many of the camera positions were exposed with no roofs, the best that could be done was to throw tarps over them and the camera operators. Meanwhile, the rain turned the ground into mud, and played havoc with electrical connections and glass surfaces. “We did our best to keep things dry, and when we had to, we dried them,” Grinyer says.

Even without the weather, the sheer scale of the Ryder Cup operation made coordinating people and equipment a constant challenge. “This was a staggeringly complex operation, what with all the elements that had to be managed on the fly,” he notes. “The biggest issue was simply assembling all of the equipment we needed to do the shoot, and getting it all to work together.”

Then there were the small details that caused hassles, such as power supplies. “With all the equipment we had to use, we found ourselves having to support a range of different power supplies,” says Grinyer. “Next time, I want a platform that all runs on the same power supply.”

Despite these issues, the BSkyB/Sony/Telegenic crew succeeded in capturing the Ryder Cup in 3D and sending it out to a waiting world. It went so well that Mark Grinyer is looking forward to doing it again, with one condition: “It has to be held somewhere where it doesn’t rain!”