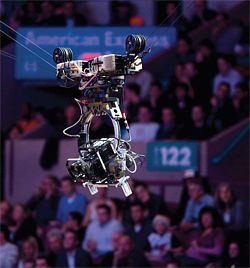 BRISTOL, CONN.—June 11, 2011 marks the one year anniversary for ESPN 3D, the 3DTV sports service that inaugurated service last year with the 2010 FIFA World Cup match between South Africa and Mexico. At that time, the network estimated that it would broadcast about 100 3DTV events a year, according to Bryan Burns, vice president of srategic business planning and development for ESPN. "As of May 2011 we had hit 107 events, so we've gone slightly beyond what we planned. All told, everything is proceeding on track."

ESPN is seeing a faster rollout with 3D than it saw with HD. "When we launched ESPN HD in 2003, we barely had any distributors, let alone subscribers," Burns said. "It took years for people to be able to tune into us on a large-scale basis. So this time around, we launched with what we call 'Available to Subscribers.' By signing deals with AT&T and DirecTV, ESPN 3D was immediately available to 45 million subscribers. Now that number is up over 65 million, thanks to additional deals with Comcast, Time Warner Cable and Verizon FiOS—which shows how much faster 3D capability is rolling out to the country."

To date, 3DTV sales have been slow in the United States, with the Consumer Electronics Association (CEA) reporting that 1.1 million units were sold during 2010. However, the association expects sales to increase by 67 percent to hit 1.9 million 3DTVs this year, and to keep growing after that.

Burns is similarly bullish: "3DTV will roll out much faster than HDTV, because the price differential between an HDTV and 3DTV is far smaller than the difference between an SDTV and HDTV eight years ago," he said. "Today, you can buy a 42-inch Vizio 3DTV from Walmart for $679. We didn't see that kind of price drop for HDTV for three-four years, and yet 3DTVs are already coming in at a reasonable price. So yes, 3D is going to penetrate far faster than HDTV did, simply because 3DTVs are both affordable and provide full HDTV as well."

A YEAR'S WORTH OF LESSONS

Among the technology innovations inspired by ESPN 3D is this 3D skycam. Looking back on ESPN 3D's first year, Burns says that a lot of production lessons have been learned. "In fact, I could probably tell you 107 stories; one for each of the 3DTV broadcasts we've done to date."

A case in point: "I once saw a split screen in 3D, where the two images were shot using different depths," Burns says. "The result was absolutely jarring to the eye. It hurt just to try and mentally process the two images side-by side.

"We have also learned that you can't do the same fast-cut edits that work in 2D, and that you really need to shoot from lower angles to really see the depth relationship between athletes," he continued. "On the positive side, 3D shows you things that you could never see in 2D. For instance, when someone does a reach-around foul in basketball, you can really see the infraction in 3D."

"Every sport gives us a fresh set of challenges and opportunities," Orlins observes. "Ultimately the question is 'how do we maximize the 3D experience and still properly document the sport?' Figuring that out is the fun part. Sports that take place on multi-dimensional playing surfaces that allow you to get close to the action create an ideal 3D experience. Right now we're looking forward to the FreeStyle Moto X coverage from Summer X Games, which will be breathtaking."

In keeping with the model it pioneered with ESPN HD, ESPN 3D will add slightly more games in its second year, while remaining a relatively lean operation overall. The channel will continue to rely on NEP's Supershooter 32 production unit (two trailers) to shoot various events nationwide, and resist the financial commitment of building dedicated 3DTV facilities in-house.

"We expect a modest increase in the number of events we will be covering, but we are going to stick with our game plan," says Bryan Burns. "This methodical approach served us well when we launched ESPN HD, and it is serving us well again with ESPN 3D."

But make no mistake: Burns does foresee a time when 3DTV sports will be nearly as commonplace as HDTV sports are today. "It's just a matter of time before 3DTV truly catches on," he concludes. "And that time is coming sooner than you think."